I began smoking a few months ago, and have been watching a lot of YouTube tobacco reviews. Bradley of the "Stuff 'n Things" channel regularly rates the nicotine level of the tobaccos he reviews, and I was wondering: how is nicotine detected? I don't really notice it (that I know of) when I smoke. Is it a taste, a sensation, or what?

Experience I would guess. I've been smoking for over a decade. I can tell when a blend is really high in nicotine because it will make my forehead sweat a little bit, but for the most part I can't tell from one blend to another how much nicotine is in it.

I agree with Paul's statement inasmuch as I can detect high nicotine content quite easily but those blends with low to medium nicotine content I can barely discern one from the other.
Of course different people have different tolerance levels when it comes to nicotine so what may seem medium to me might be regarded as high to you. If you get a little light headed and a queasy feeling then chances are you are smoking a high nicotine blend.
Regards,
Jay. 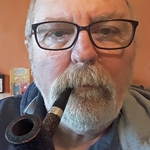 I'm with Jay on this. I can smoke maybe 95% of tobaccos without particularly being aware of Nic content, apart from a general feeling of well-being. If I smoke some of the remaining 5% (Warhorse etc) I know all about it very quickly, and not in a good way - the sweat breaks out and I get queasy.
Mike

I seem to be quite sensitive to nicotene. As it happens Lady N is used in insecticides and is a very strong toxin. Believe me, if you overdose on it you WILL notice it. Ask me how I know.... 8O

How will it affect a long term pack a day cigarette smoker? I still smoke 12/13 cigarettes a day, and while I have not felt a nic hit, I have seen three things.
a. If I smoke a pipe something really mild, I sometimes still feel the urge to smoke a cig. If something is rated medium it is unlikely I will feel the need to smoke at least for an hour

b. I cannot smoke a pipe somewhere past the 45th minute mark. I will put it down

c. I don't inhale pipe smoke but if I am on a long break from cig I will involuntarily inhale a couple of puffs

Obidonkenobi, think of nicotine in terms of alcohol. A very light on nic. blend like 1-Q for example, would be like drinking 1 or 2 beers, you won't generally feel anything, just taste the tobacco. Next would be a medium nic. blend like Dunhill 965, this would be like drinking 5 or 6 beers. You start feeling more relaxed and you become aware of the nicotine, nothing bad, you just start to feel the "buzz" so to speak. Next would be a heavy nic. blend like Dunhill Nightcap, unless you are very accustomed to smoking heavy nicotine blends, you will start to feel a hard buzz, akin to 10 or 12 beers, you will start to feel a bit lightheaded, you will start to feel sweat on your forehead and your body will tell you when to stop smoking....or else! Lastly would be a very heavy nic. blend like Black XX, this tobacco is akin to drinking a case of beer, the room is spinning, the sweating is profuse and your lunch will soon be coming back out the way it went in. That being said, there are some smokers who get a buzz off of the very lightest tobaccos and still others who can smoke a bowl of Black XX with little consequence. Everyone's tolerance is different and the only way to find out where your limits are is to exceed them. I remember my first bowl of Nightcap many years ago. The tobacconist told me it was strong, but I thought he meant strong in flavor. At the time, I was a regular smoker of a Tinder Box blend called Anniversary, which is a cherry aromatic that is low in nicotine, I was intrigued by the tin art on Nightcap and wanted to try out those fancy tinned tobaccos....Nightcap was my first tinned blend. I packed my pipe, a Big Ben that had about a group 5 size bowl, full of Nightcap. I lit up and started puffing. I didn't immediately care for the taste, but I figured it was like beer, you just had to get used to the stronger flavors, so I puffed on. I don't remember how far into the bowl I got, but I do remember that the room started to spin and I got cold sweats across my forehead and face, I managed not to puke, though my stomach was strongly suggesting I do so. At the time, I had no idea that different blends had different amounts of nicotine and the lesson was a hard one. I hope your explorations go easier.

Very well put Philobeddoe! There were times when I was thinking too the "strong" related to the flavour. Well, now I know which tobaccos to avoid... 8O

Yes, nice expo, Philo! Could also be similar to hot spices- some will put me on the floor, others, no problemo. I think Burleys put me under, but I've not done a scientific test; just avoid them. (Not hard as I am an English/Balkan smoker, with some VaPers in the mix.)
When I feel the urge to light up a bowl, I don't think it's related to nicotine, but it could be.

Re: how it affects a cigarette smoker...
I am ~pack/day smoker and nicotine from pipe tobacco rarely affects me. When it does, it's generally from burley or burley/perique blends a la Haunted Bookshop and the like.
Never to the point of spins or sickness, but if I smoke a big bowl of something like that it will definitely make me feel heavy in my chair. Absorption through the oral mucosa is a slow gradual build vs. cigs, which go right to the bloodstream. I've never been nicotine sick, but I can feel it sometimes. It's just a different experience than cigarettes.

Black XX, this tobacco is akin to drinking a case of beer
Click to expand...

Excellent review. Added some to my cart, haha.

Absorption through the oral mucosa is a slow gradual build vs. cigs, which go right to the bloodstream.
Click to expand...

I agree. It is gentler, but is sustained longer, and seems to be more "profound" for lack of a better term. There is a lovely state of mind with Nicotine that is like watching leaves fall into a pond in perfect silence with a slight cold breeze on a balmy day. Good for the mind.
I post this link too much, but it's a great read: https://www.gwern.net/Nicotine

Thanks for the info, all, especially philobeddoe. So, it's a physiological effect with physical reactions ranging from feeling relaxed, to light-headed, to sweating, dizziness, and at the far end, nausea and vomiting. Wow. I don't do caffeinated drinks (any stronger than Pepsi), never smoked cigarettes, and no recreational drugs of any kind. I'll probably be a nicotine pushover. I've purchased several random house blends from Mission Pipes in San Jose, and The Piedmont Tobacconist in Oakland, not knowing a thing about them other than their colorful names, but haven't smoked any of them, yet. Thanks to the info you folks have supplied, I now know to look out for the signs of nicotine dosing, and hopefully keep out of the "nasty zone," ending up puking my guts out. I hate it when I do that ;-)

Ultimately, this one is a question of knowing yourself.
When you feel an effect, it is subtle, so you need to be carefully attuned to your normal thinking and state of mind.
When that effect is absent, as when smoking the more popular Va/Pers, similarly it requires precision of measurement -- "sensitivity" in the Nietzschean parlance -- to notice what you have not felt.
I get agnostic on Nicotine. To my mind, without it, people would not smoke. But over-emphasis on anything, whether flavor or Nicotine, seems to miss the point also. Smoking is a whole experience: having something to do, a pleasurable taste sensation, a gradual infusion of calming and focusing Nicotine, the glorious smell of a pipe, something warm to hold in your hand while you scream "get off my lawn!" in lieu of a rifle, and so on.

Thanks Death:rofl: :rofl:
I smoked "Old Chipawa Straight" many years ago. It was non tobacco and without any Psychoactive component. The smell and taste was wonderful. But, there was no calming or relaxing effect as with tobacco. So, a light Nicotine smoke will be just a mild sedative experience. YMMV

Oh Philobeddoe have been doing this similar road to yours and more that once,fortunate enough, now I'm thinking at last I'm ve got taught by hard way and can detect first symptoms of nicotine overdosing, and how to avoid having it,,