I bought a Peterson p-lip meerschaum (kind of quasi-author shape) off ebay a few weeks back. I would post pictures, but I have yet to figure out how to do that from google photos (arg!). It's got what I can only describe as a kind of "pebbly" finish that the guy I bought it from told me is called "coral". He's a good guy and I have no reason to doubt him. Even after giving a couple thorough scrubbings with a stiff brush, it was and mostly remains a dull brownish-gray color. We even dubbed it "the turd pipe" for obvious reasons. I love it and smoke the hell out of it, several times a day, no complaints whatsoever. But it's started taking on a bright pinkish red color on the bottom of the shank and on the side of the bowl where my index and middle finger rest. Kind of the color of cranberry juice. It just makes it uglier than it already was, and I love me an ugly pipe, so again, no complaints. But plenty of curiosity. Could this possibly be meerschaum coloring? My impression was that it's almost certainly not block meerschaum, even if it's from the Manx factory, so I can't imagine that's real live coloring. Or could it be an old finish that is getting revealed by heat and/or the oils on my fingers? It is reddest at the spot that the exterior gets hottest. That's also probably where the meerschaum is thinnest. Can anyone enlighten me about this? I haven't been able to find much information about Peterson meers online. Thanks in advance! 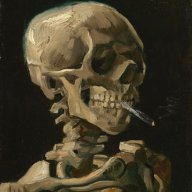 Pics would help a lot. Probably African meerschaum I would think. Are you smoking it hot? I mean really hot??...

OK, I'll try posting pics again, two different ways this time. No, I'm not getting it hot, barely warm on the hand holding it.

Tried to load in a photo I just uploaded. No help at Amazon.

Finally got a photo up onto Google, and think it may be all right. I'll post the URL under the image.

Here's one found "in" Google Images, but links to an outside server. Many if not most are that way. jpmcwjr - Did you take that pic? If so, wow!
If you're using Google Photos (mine is linked to my gmail account), you can get much shorter links by clicking on the thumb in the folder, then click on "share" above the expanded pic, then select "create link". It apparently doesn't do any good on this forum (or at least not for stupid me), but it's handy for other things.

Perhaps you could tell me what I'm doing wrong? Here's my process: 1. click "IMG", 2. paste in the link to the photo (either the full link or the abbreviated one) in my G Photos folder.

jpmcwjr is the master of pic posting on here...if he's having difficulty with your configuration there may not be a reasonable fix.
You can upload a pic to your forum account album and copy the image address from there.

If you open the full sized image, then by right clicking and holding you'll get a dialog allowing you to copy the image link (its URL). Paste that into the IMG box on reply. Accept no substitutes, thumbnails or instructions from Google!
Thanks, the Yosemite photo is mine, but I didn't paint nor capture the painting with a photo!

OK, thanks! Here goes one more time, and if it works, I'll be irritated because I swear that's what I thought I was doing the whole time. Thanks for your patience, and please accept my apologies!

And one more try! Moron that I am, I finally realized there are very clear instructions right on the main page in one of the stickies I never noticed before. Pretty sure I've got it this time. If not, then I give up. Thanks again, jpmcwjr! Thank you! Wow, that would be so cool if the whole thing turns that color. Better keep puffing, I guess!