Cheap Dunhill - too good to be true?

A Dunhill pipe, although overpriced and apparently not better manufactured as a lot of other brands, it still my grail pipe. The English brand is something like an icon in pipe history to me and I was determined to own at least one. Too bad they are expensive even as an estate.
Recently a vintage Dunhill crossed my path on the German Ebay. Itis said to be made in 1965 and by this missed being my birthday pipe by one year. I placed my (low) bid and won! It turned out that I had to pay the princely sum of Euro 12.49. Not bad for this one, is it?

Well, you might have suspected that there must something very fishy with this pipe at that price, don´t you? In fact your suspiciousness did´t misled you as this specimen of British smoking culture was snapped at the shank! Well, nothing that a pipe tinkerer like me could deter.

The pipe was converted to 9mm filters and left the shank with not much material in this area. I glued it back in place with a heavy duty epoxy which went so quick that I even forgot to take picures. After curing for a few days I could resume with my ususal cleaning routine.

Lot´s of cake in the well smoked Dunhill!

Just a little bit of tooth chatter on the stem.

I have never reamed that much coal out of a pipe! I even considered to keep the stuff and use it for my homemade pipe cement as the heap was that big.

Much better now but lot´s of coal on the top of the bowl. A drop of saliva won´t do it here.

Not afraid of using a blunt tool here....

The stain might be gone but so is the coal and the burn marks. This was a very clean pipe despite of the huge amount of cake. I cleaned it with a few cotton buds, pipe cleaners and cotton wool with alcohol. No pictures of the process but you all might know it anyhow.

The stem was an easy job for my heat gun and the bench buffer.

Nice black any shiny again. It´s even impossible the polish off the white dot as it is a little plastic rod that is inserted into the ebonite.

I restained the bowl with just one coat of a reddish brown to keep the color as original as possible.

As always I rub the rusticated or sandblasted pipes with a brush and furniture wax bevore they go on the buffer to reach the deep groves and spots of the wood.

After buffing and waxing:

Well, this Dunhill might never be a collectors piece as it was modified and heavily damaged. It has a fairly large bowl and is very light for a pipe of this size. It may not be perfect but it´s mine and I got it even without paying an arm and a leg for it.
Guess I will smoke the heck out of it! 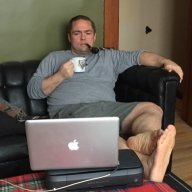 Gorgeous pipe and a very good restoration. I never cease to be amazed by your restoration work StValentine. Happy smoking! (let us know how it smokes by the way)

You've performed a near miracle! Looks like there will be a lot of heck left in that one to smoke,too!

I think you'll be happy with that one for many years to come!

Great job, but I'm just curious. Did the seller state that the pipe was damaged?

Thank you Gentlemen, it was a fun restauration.
@Phil67: Yes, the first two pictures are from the seller and I was completely aware of what I was buying.

Great rescue and refab. You have every reason to be proud of that pipe.

Well done!!! A lot of life left in that pipe now!

I have a bent for pipes with silver banding (generously) around the shank BECAUSE of an incident that occurred 4 decades ago. I had a straight sorta pot Dunhill from my grandfather that was my very favorite. I was smoking it one nice fall day and put it in my back pocket (you guessed it) and proceeded to sit into my right-hand drive Triumph Spitfire. CRACK! It was essentially the same crack that your pipe had. But I was so despondent that I buried it in the backyard. I have since bought nearly exclusively banded pipes in some deranged idea that this mishap would never happen again. If I had known as much as I know now; and obviously much less than you know, I would have given the restoration a go. Great job! enjoy the smoke!

Excellent! Now you should make sure it never comes apart again by using a metal sleeve inside the mortise. Sure, it might smoke a little wet, but .... just to be safe.

Thank´s everyone for the nice words!
@rcstan: I am thinking about reconverting the pipe back to a no filter 6mm tenon for stability. It will involve working with a lathe though. I hope that my colleagues at my workplace will help me with that.

Should be fairly easy with a lathe, especially if the damage is, as it appears from the pictures, in the enlarged part of the mortise. Take a piece of aluminium tubing or plastic ( a la Stanwell ) and line the mortise with it, then work the tenon down or replace it.

It was converted to 9mm filters so there´s a fairly large opening in the stem in which I would like to insert a delrin tenon that is turned down to 6mm on one end and 9mm on the other (which goes into the stem). I would like to glue a tubular piece of briar into the shank.

I have a rehabbed Dunhill that had a broken shank too. It smokes just fine.
Here's something you might want to try for caked rims. Take an old sock and wet it and wring it out. Fold it and set it over the rim and leave it for several hours. The cake/crud absorbs the moisture and softens. I use dental tools to gently scrape it off and pick it out of the crannies. Sometimes this needs to be repeated a couple times. Light buffing with fine steel wool helps finish it. It preserves the original blasted surface almost perfectly. Some dark coloration might remain. But I think the dark shells match up pretty well to cordovan leather dye. Using that, it isn't very noticeable if at all.

Great salvage of a fine old pipe. It looks perfect.

Nice save! Great job on the restoration.