I've noticed that I appear to be the main Brigham user/fan on the forum these days; this conclusion is reached solely by virtue of what I read on the @jiminks "What Are You Smoking" thread.

I have a hard time believing that more of you fine-forum-fellows don't have Brighams in your collection; or, are not smoking Brighams in greater numbers/frequency then the daily Smoking Now posts would lead me to believe.

So, help your ol' buddy Sherm alleviate his pondering and musing, which leave him wondering if he's is out-on-a-limb with his Brighams all alone, and be counted for this Brigham Role Call

I have about 20 Brigham pipes, mostly from the patent era ranging from 1 dot to 4 dot. I have a few 5 and 6 dot from the made in Canada and Canada era also. I have 1 new production pipe, it is an Acadian bulldog shape 16. Overall the Brighams I have are my favorite smokers and I love each of them very much.
Reactions: kurtbob, CoffeeAndBourbon and shermnatman

I’ve got a couple of the new French made Acadians. A straight billiard and a straight apple. They look great, but I have yet to smoke either of them! I got them during a buying spree, and I likely won‘t try them until the spring, when it warms up.

I plan to try them first without filters, as I hate maintaining filters.
Reactions: kurtbob, CoffeeAndBourbon, shermnatman and 1 other person 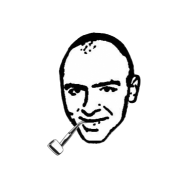 I have recently expanded my fleet with #336 Bent Brandy. Thinking of adding a few more shapes into my collection in the future.
Reactions: kurtbob, seanv, CoffeeAndBourbon and 1 other person

We have just enough Brigham guys for a game of Bridge... - Sherm Natman
Reactions: kurtbob and seanv 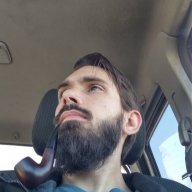 I have one Brigham, and it's one of my best smokers. I'm waiting on a pipe sale and I'll buy a few more.
Reactions: kurtbob, seanv, shermnatman and 1 other person

Mr.Mike said:
I have one Brigham, and it's one of my best smokers. I'm waiting on a pipe sale and I'll buy a few more.
Click to expand...

shermnatman said:
Nice! Which model do you have, Mr Mike? - Sherm Natman
Click to expand...

It's the bottom tier system, the 47s. I love this pipe, picked it up on sale last year for 39 dollars. Can't beat it.
Reactions: kurtbob, shermnatman and seanv 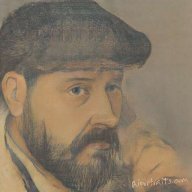 I have several, including my most prized pipes that belonged to my father. I also have a couple of his old Trypis pipes which I recently learned were made by Philip Trypis who trainer at Brigham when they still made the pipes in Canada.
Reactions: kurtbob, Casual, shermnatman and 1 other person

Mr.Mike said:
It's the bottom tier system, the 47s. I love this pipe, picked it up on sale last year for 39 dollars. Can't beat it.
Click to expand...

I think that would be the rusticated Voyageur-series; yes?

Spinkle said:
I have several, including my most prized pipes that belonged to my father. I also have a couple of his old Trypis pipes which I recently learned were made by Philip Trypis who trainer at Brigham when they still made the pipes in Canada.
Click to expand...

Well, that's 6 of us in the clubhouse so far. - Sherm Natman

Here is a photo of my two most prized pipes. Forgive the poor photography. 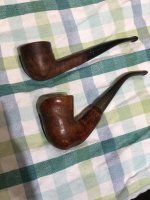 These were both my father’s if you look closely you may be able to see in the bottom 3 dot that my father over the years attempted to carve his own “finger grooves” into the stummel where he would normally grip the pipe. No idea what inspired this but it feels somewhat comforting to smoke the pipe and hold it in the same way he did, sort of a link to him.

The top pipe has a bit of history attached to it as well. In Toronto we have a place called the CNE (Canadian National Exhibition), it’s like an old school fairground type property in the west part of the downtown core. It hosts all sorts of events to this day, such as agricultural fairs and parties - I even wrote my bar exam in one of the massive pavilions there.

One of the biggest events there each year is the Toronto Sportsman’s Show. It’s a massive outdoors sales and exhibit and gets vendors from around the world. My father was from very far up north Ontario and so grew up hunting and fishing, so he took my sister and I every year as he never lost his passion even though he lived in the big city.

Brigham was always an attendee at the show, and every year they would sell special “Sportsman” pipes, the pipes were so named in honour of the show itself.

They are barebones pipes meant for the outdoors, and were cheaper options so that hunters and fishers would be able to take them along without worry. To this day these are still sold at the show every year, and I’ve noticed once or twice smokingpipes.com has a few in stock.

The one in the picture was my father’s, which he purchased with me at the show when I was 4 or 5 years old (1985 or 86, can’t remember specifically). Beyond the sentimental value I also love the fact that it’s a four dot, as I don’t think I’ve seen any other Sportsman with four dots. Perhaps it’s an oddity?

Brigham really is a part of “Canadiana” as it has such a rich history here. The slow globalization of manufacturing has made things cheaper, but I still think we lost something along the way.

Sorry if I rambled.
Reactions: canucklehead, Casual, shermnatman and 2 others

@Spinkle - Very, very cool; you are lucky to have them; as I am sure you know. Your photography is fine, I appreciate seeing them.

Beautiful sentiment; and, I know exactly what you mean about feeling the connection to those we have lost through those personal things of theirs which we identify them with.

Yes, The Sportsman Line: I've only seen those finishes in pictures, and did not know what price range they fell in.

That's great; and as long as you have that same pipe to hold in your own hand, you can reconnect to that moment with your Dad - forever.

Sadly, that's much of what has occurred here in the States too - and, across the board - it's very difficult to purchase anything new here that is actually made here.

Rambled? Hardly; it was a great, meaningful, and heart-felt post. Thank you for sharing it with us - Sherm Natman
Reactions: Spinkle, kurtbob and seanv

I've more Brighams than any other brand. Well, 'cept for cobs, but those don't qualify, they're more like semi-pipes. 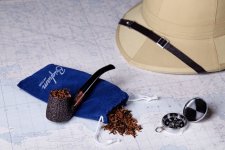 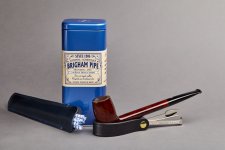 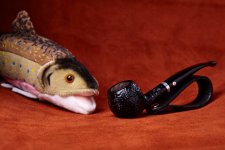 Reactions: canucklehead, Casual, shermnatman and 2 others

They have halibuts too, you know, just for the halibut.

olkofri said:
I've more Brighams than any other brand.
Click to expand...

Nice! That's the same with me, more Brighams than anything else.

Looks like you and I have the same Canadian.

And, speaking of Pith Helmets...

Did I ever tell you about the time I was on expedition in the deepest, darkest, densest, most remote part of the South American Rainforest; wherein I, and my small party of fellow hearty explorers, suddenly found ourselves ambushed, surrounded, and trapped by an indigenous tribe of head-hunting, canabalistic, 8-foot tall Amazonian warrior-women - who, never having seen a white-man before - decided to take us for their mates, one-and-all - due to our visual novelty and convenient size, relative to their own, don't you know - and, while holding us all at spear and arrow point, bade us to climb into a large earthenware pot, sitting over a roaring fire, which was filled to the top with boiling oil, for the purpose of forcing us to partake of their infamous Husbandry Ritual; wherein we would surely end-up quite 'spectacularly abused'... don't you know.

Unless I acted fast, I knew we were all surely doomed.

Our Weapons-of-Defense had been instantly seized from us upon our unfortunate capture, and I, being the leader of this brave expedition, was left armed with only with my trusty Brigham pipe in my left sock, three strike-anywhere matches, and, in my right sock, the remainder of a 1.5 ounce sta-fresh foil pouch of Middelton's Prince Albert pipe tobacco.

Our end was surely at hand; however, thinking quickly, I... Oh, never mind.

Good looking fish you got there too, Olkofri. - Sherm Natman
Last edited: Jan 15, 2021
Reactions: seanv, olkofri, Mr.Mike and 1 other person

I only have this one, which dates to somewhere in the early 80s. It is a great little pipe. 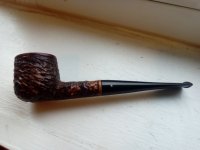 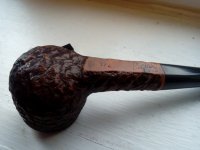 Reactions: canucklehead, seanv, Casual and 2 others

I have 2 Brighams, both Heritage Canadians (French made). I do use the distillators in them, keep 3 in rotation until I can’t use em anymore. Great pipes!
Reactions: canucklehead, seanv, Casual and 1 other person

mikethompson said:
I only have this one, which dates to somewhere in the early 80s. It is a great little pipe.

@mikethompson - Wow, love the color of the dyes used on your pipe. I wonder if they always were that shade, or if they darkend with age/exposure to sunlight, etc. Yours looks so much more like 'tobacco colors', then what I normally see. Yes, agreed; a great little pipe! - Sherm Natman


kurtbob said:
I have 2 Brighams, both Heritage Canadians (French made). I do use the distillators in them, keep 3 in rotation until I can’t use em anymore. Great pipes!
Click to expand...

Outstanding Kurtbob! I just got my first Heritage Canadian last week; after wanting to pull the trigger and get for nearly 2 years. I'm still getting used to it; but so far, I love it. I can certainly understand why you would have 2 of them! - Sherm Natman
Reactions: seanv and kurtbob

shermnatman said:
Wow, love the color of the dyes used on your pipe. I wonder if they always were that shade, or if they darkend with age/exposure to sunlight, etc. Yours looks so much more like 'tobacco colors', then what I normally see. Yes, agreed; a great little pipe!
Click to expand...

It would look even be 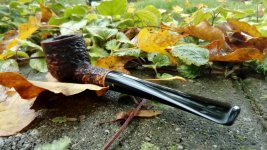 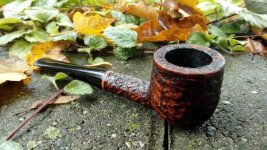 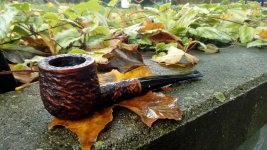 Reactions: canucklehead, seanv, Casual and 2 others
You must log in or register to reply here.