Anyone Have 'Both' Styles of the Kaywoodie 99?

I recently picked up a Kaywoodie Flame Grain 99S saddle stem bulldog as a companion to the 99B bulldog that I purchased from SSJones about a year ago and noticed that the 99S has a much bigger bowl in external dimensions than the 99B. Both pipes have identical shank stamping, and identical 4 hole, small ball, unstamped stingers. I was wondering if this was a common difference between the two styles or if the size of the bowls changed over time?
Any Kaywoodie gurus floating around the board?
PS- I passed on a 4 digit Super Grain 99 saddle that was in decent shape except for the thin wood above the upper bulldog groove which was chipped away for about a quarter of the circumference of the pipe. I'm thinking I should go back and get that one. Kaywoodie pipes can be seductive.
doc 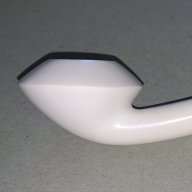 That’s a shape I’ve collected for 10 years. My collection of 4-holer shape 99, the outside diameter varies not based on weather it’s. 99b or 99s, but more based on when it was made. The early units & higher grades seem to have a larger outside diameter & a flatter top. Possibly it was related to the piece of brial & availability at time of production.

I don't know what vintage this is, but discussions on Forums have noted that in the late '40's, maybe the early '50's, Kaywoodie was the premium factory pipe and cost more than a Dunhill. Somewhere along the way, Dunhill changed its pricing and marketing. I have a fairly recent Kaywoodie Drinkless, with the stinger, and though it was sold as a low-end pipe, with a stinger no less, it smokes well. You do have to wipe off the stinger after you use it, but it just takes a few seconds.