A K&P Restoration for Mike

Hello All,
Our good friend Mike Thompson recently messaged me after being inspired by the St. Pat's pipe I did for Unkleyoda. He asked if I would refinish a K&P for him that is in his rotation. What an honor (and frankly a terrifying responsibility) to be trusted with another forum member's baby. Once he agreed to my lengthy legal disclaimer, terms, and hefty fees, I said "sure! Send it on." And thus another adventure in pipe restoration begins.
The obligatory "before" pics: 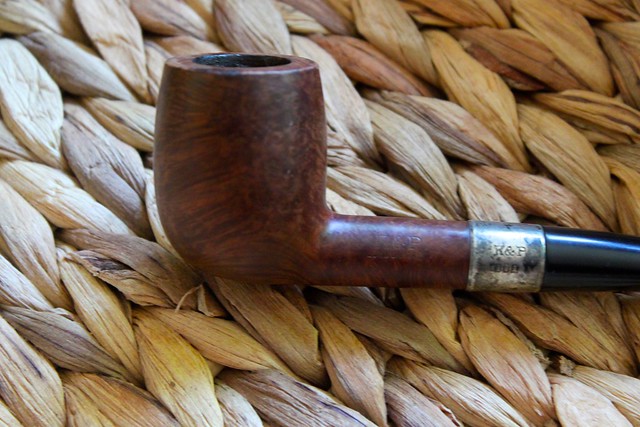 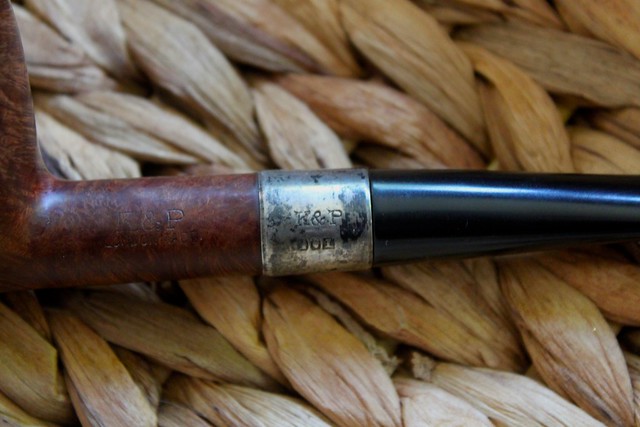 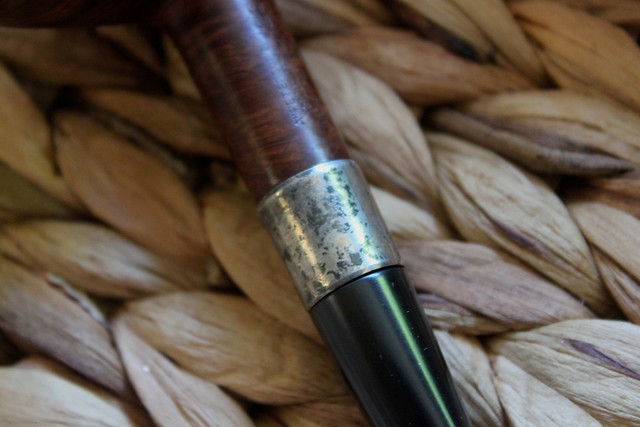 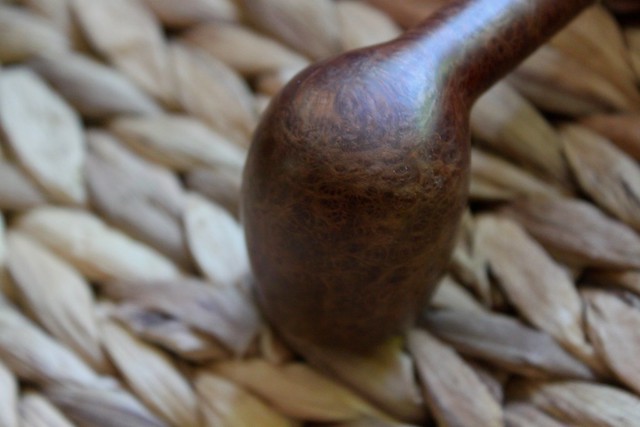 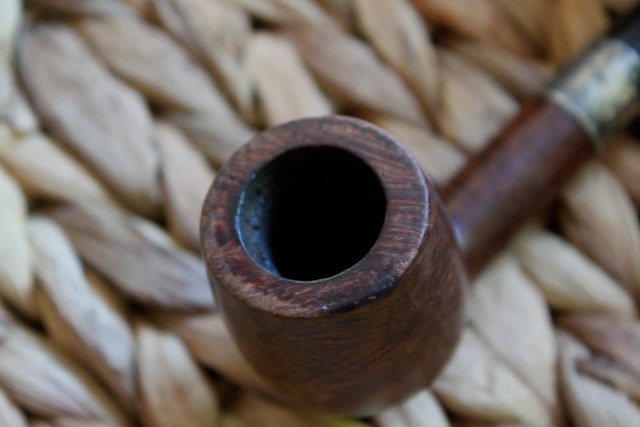 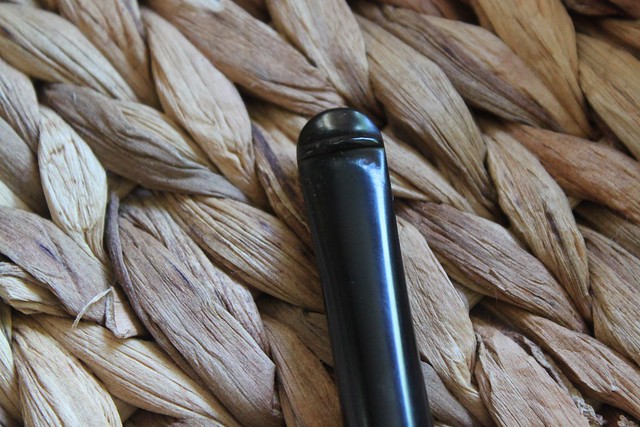 There's reason to believe that there is some pretty grain under that old dark finish. Just gotta get it to come out. The stem has a pretty decent sized bite mark in it and the band is significantly tarnished. Cake is not too thick but the shank is filthy and the airway is restricted. It'll be fun to breathe new life into this old gal.

Great project to undertake. I am excited to see the refurb. What year do you think this is? Looking at the third hallmark it looks like a L.

I can't wait to see this one either. The first was quite stunning.

Carl thank you for taking this on. Hopefully you can do some of your magic on this one!
The hallmark indicates it is from 1950, my parents birth year.

What an honor (and frankly a terrifying responsibility) to be trusted with another forum member's baby.
Click to expand...

The hallmark indicates it is from 1950, my parents birth year.
Click to expand...

I almost didn't want to post the date lest it be taken that way!

mikethompson, I was born before your parents!

I almost didn't want to post the date lest it be taken that way!
Click to expand...

Hi Guys. I'm sorry that it has been so long since I posted anything. I'm a school administrator and this time of year is extremely busy for me... finishing up one school year, preparing for next year, doing evaluations, getting new hires lined up... But I have managed to get some work in on this pipe. I actually am about ready to apply wax and polish the band. Here are some pics of how it was a few days ago. Here the pipe has been reamed, cleaned, sanitized, and the finish has been removed down to the bare briar and it has been sanded with 220 grit. Since these pics it has been sanded all the way to 5000 grit (400, 800, 1000, 1500, 2000, 2500, 5000) and the contrast stain has been applied. I haven't uploaded any of those photos yet. But anyway, enough of all that. 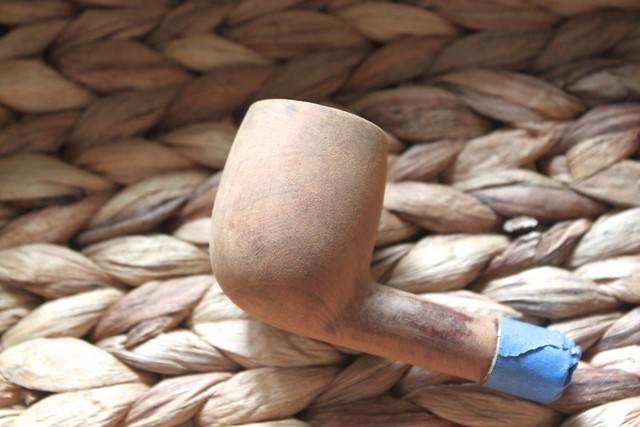 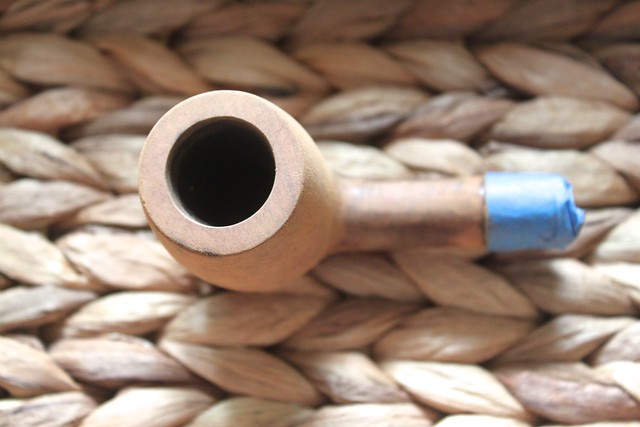 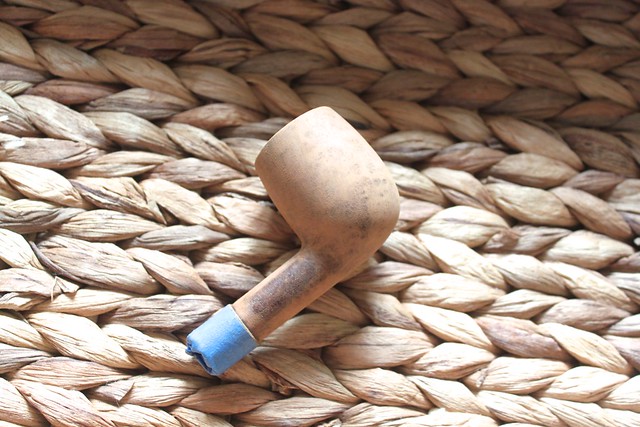 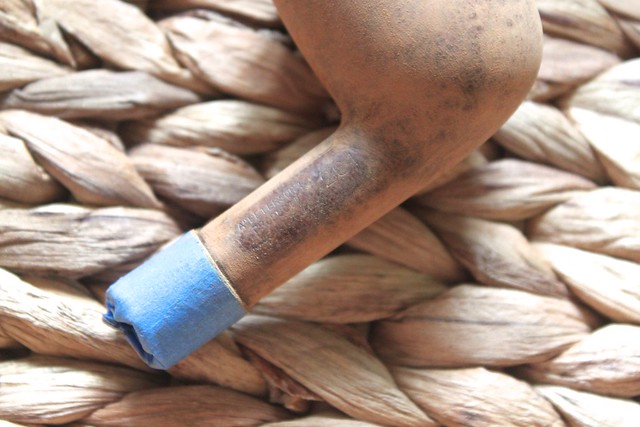 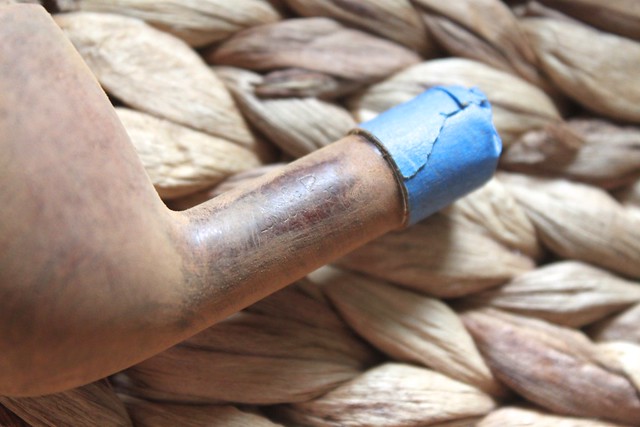 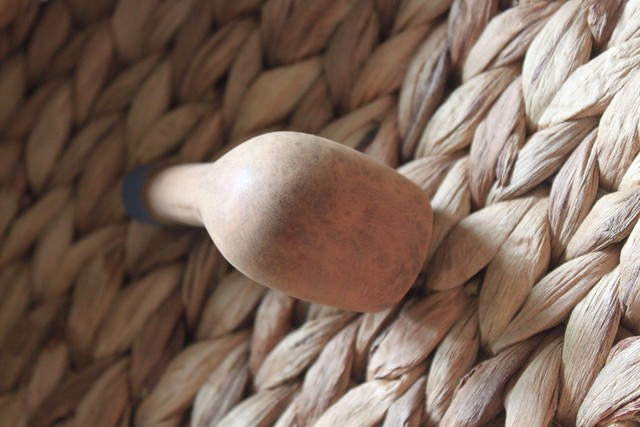 It is coming along nicely Carl!

Turning my attention to the stem for a bit...
Someone obviously clenched this pipe with their teeth right up next to ridge. There was chatter and one big bite mark that was about to break through. I did what I could to raise the dents with heat and then sand down the high spots. It worked pretty well, but not completely. The remaining low spots had to be filled so I used a mixture of superglue and graphite powder. Once that was complete I sanded the whole stem with 400, 800, 1000, 1500, 2000, 2500, and magic eraser. Then used a polishing compound on a buffing wheel to get the high luster. I think it turned out pretty good.
Before pic: This dent doesn't look as bad in the pic as it was. Close inspection revealed that it was close to breaking through.

Just after the repair. Has only been sanded with 400 at this point. 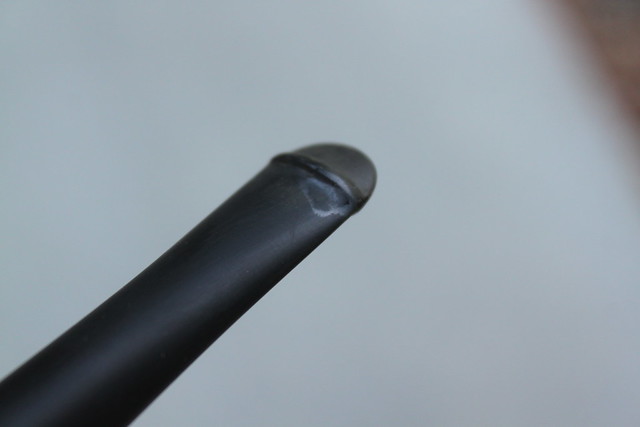 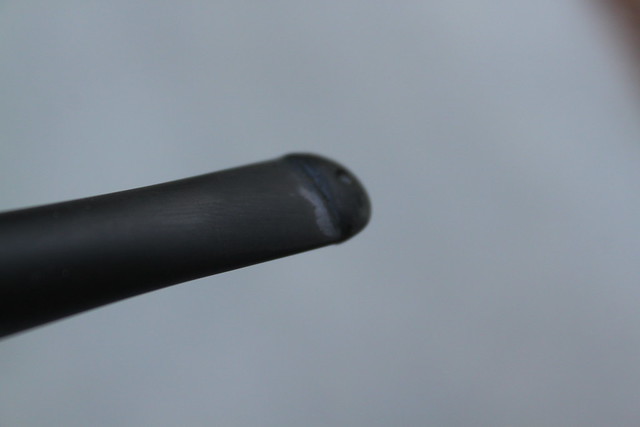 After final polishing. Some obsidian oil will probably make the repair less visible but I am all out at the moment. 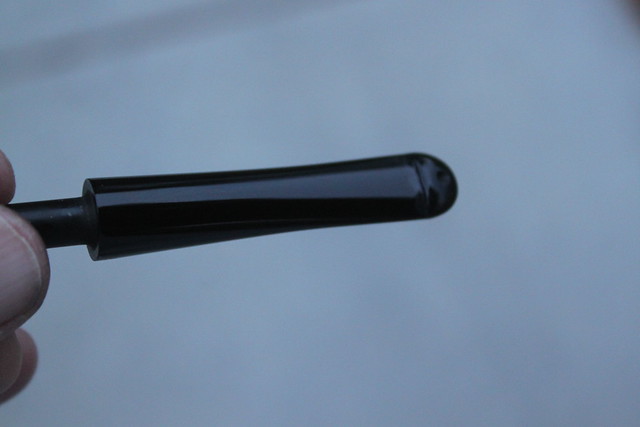 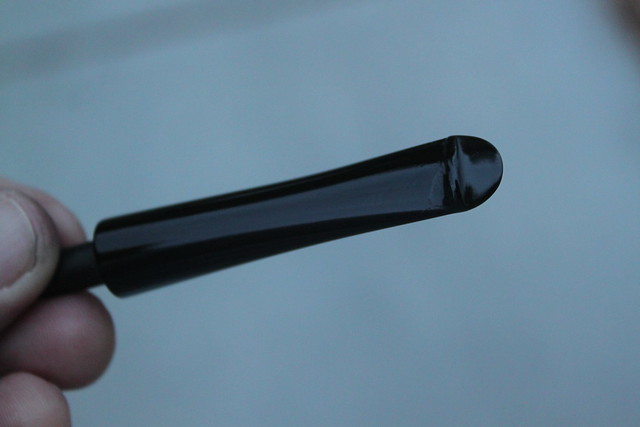 That stem looks great Carl!
I've heard of the graphite powder / super glue trick before, it looks flawless to me.

How about some before and after shots of that metal band? 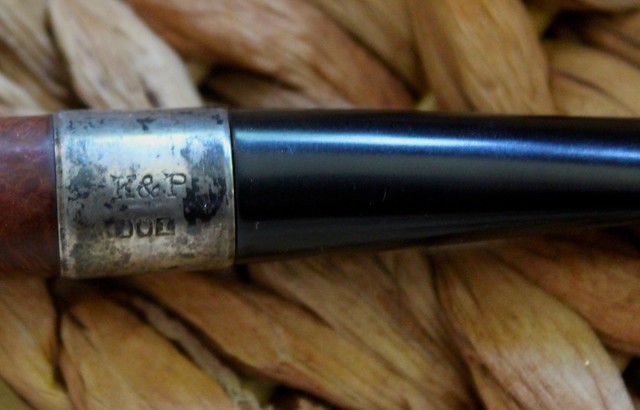 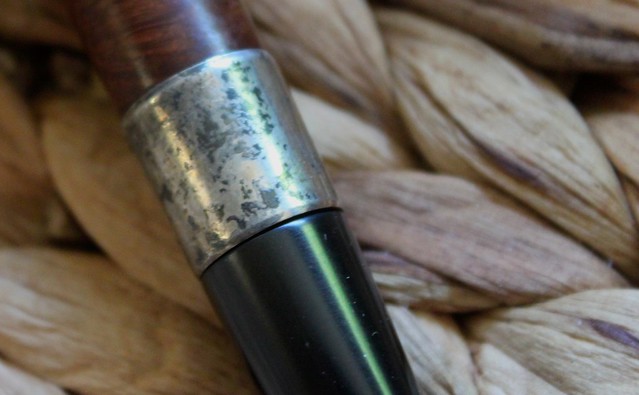 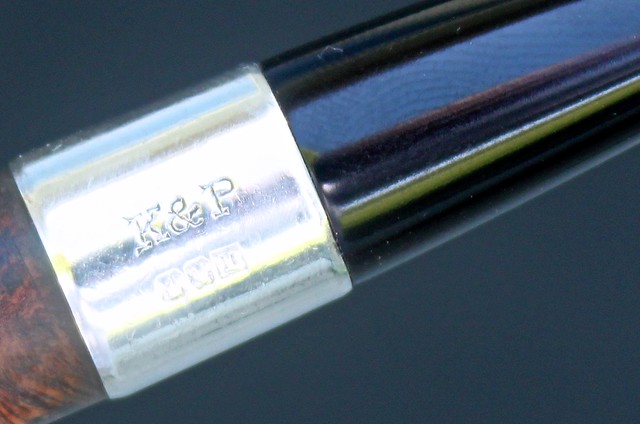 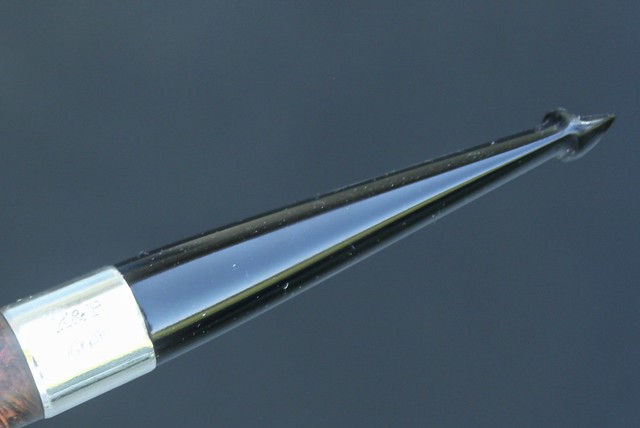 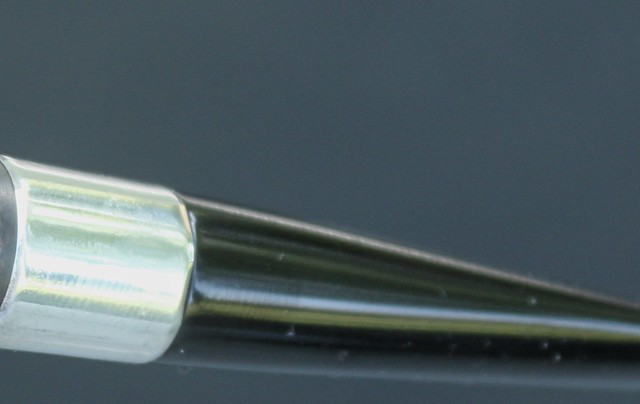 Check out the finger prints and specks of dust on the stem! Those are not noticeable with the naked eye. Likewise the high level of detail in the pics makes the band look a little worse than it looks in real life. It is super shiny and smoother looking.

Beautiful stem work!
Thanks for sharing.

I could almost cry at the history of the wood and band before the restoration and definitely could at the restored beauty afterward. Such a pretty pipe after all that work, and more to come once the stummel is finished.
Is that what they call an orific bit?

He does nice work indeed. But, that is not an orific bit as I understand the term. Those types were the sorts you'd see on pipes from the early 20th century and were round or oval in nature. That looks like a Pete p-lip to me.