A Liberal Stands Up For Santa 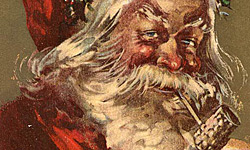 Up in Canada (where I understand they keep beavers as house pets) a woman named Pamela McColl has caused to be published a vile, stinking travesty of an American classic.

McColl paid for her book to be published, which is what you do when your book stinks so much that no one will publish it and pay you.

She re-wrote Clement Moore’s "Twas The Night Before Christmas" and, in so doing, has removed the lines, "The stump of a pipe he held tight in his teeth. And the smoke it encircled his head like a wreath."

The poem’s a classic, that rarest of literary reindeers, an enduring piece of writing but, in 2012 Canada (and she’s brought this lousy book to America, too), we don’t give a damn for classics. What we give a damn for is the endless self-aggrandizement of self-published literary losers whose "talent" doesn’t stretch beyond butchering someone else’s work.

But perhaps more than the self-published crap that inundates the word like a lumpy brown flood, more even than the assault on my beloved pipe, I resent the notion some dimwits have that everything can be edited to suit how we feel now.

In the Stalin-era Soviet Union, members of the government were frequently "liquidated," which is to say they were taken to a dirty, mildewed cellar and shot.

As soon as they shot Comrade Nogoodski, the government would begin the process of airbrushing him out of the pictures in the history books. Goodbye, Nogoodski. You never existed.

My ancestors were Norman French and they went on the Crusades a thousand years or so back. As they marched through Europe, on their way to save The Holy Land, they butchered every Jew they could find. I don’t want to butcher Jews and I think what my ancestors did was wrong but I want it in the history books because it’s true.

Truth is truth and fact is fact and you must respect them in their smallest incarnations or they vanish like smoke in the wind. Handle the truth gently. It can break. Touch facts reverently. They can guide you home. Read good words slowly. They can take you to the stars inside yourself.

Santa is at the North Pole tonight, standing just outside the reindeer barn, having bedded them down for the night. He’s a little old and he’s fat but his blood moves faster as he raises his bearded face to the night sky, feeling the wind against his forehead.

And he walks through the boot-top deep snow towards his house, where a glass of mulled wine and a pipe wait for him. He won’t stay up too late over either one. He works long days in December.

And in Massachusetts, where I live, it’s in the 30s tonight and windy. I finish my column and I light a pipe and I head for the living room, where I will pour a glass of Irish whisky and sit for a while, resting.

We may not be the latest thing, me and Santa but we get the work done.

And the smoke, it encircles our head like a wreath.

To find out more about Marc Dion and read features by other Creators Syndicate writers and cartoonists, visit www.creators.com.

The e-book version of Marc Dion’s book about pipe smoking, "Mill River Smoke," can be found at www.sumnerbooks.com.

[Editor’s note: We have a few related items below.]

This was reported on CNN Headline News in October. Watch the video clip and notice that weatherman Bob VanDillon & show host Robin Meade understand how ludicrous this is. Listen to their banter at the end.

Even mainstream news anchors understand what a slippery slope the PC-fanatics hoist upon us with their comments that Frosty the Snowman is next, and that both Santa and Frosty will be forced to slim down as well … so here’s our latest cartoon … 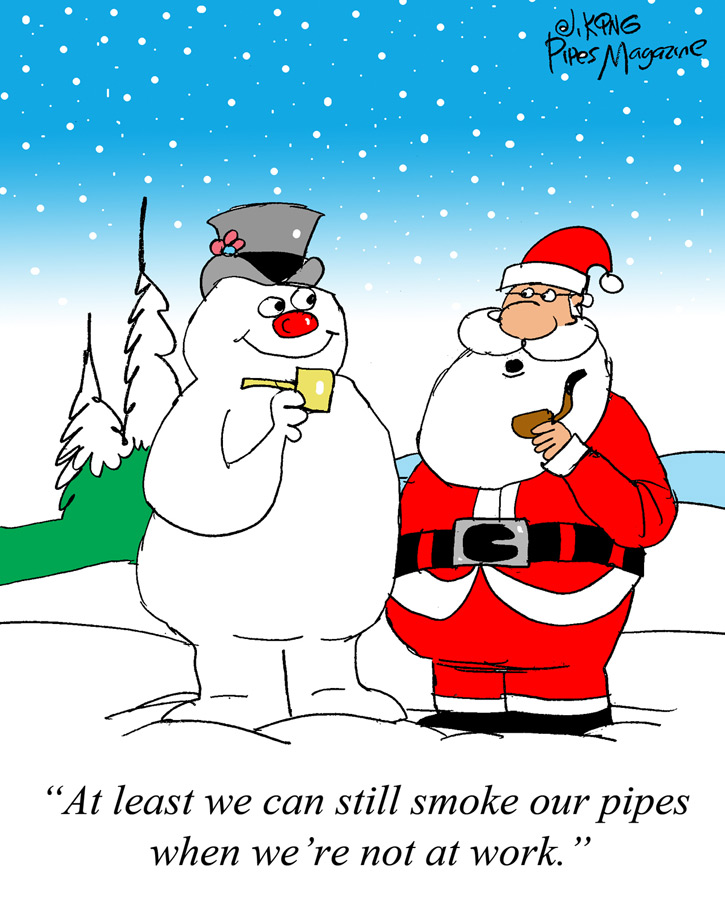