The Development of a New Blend 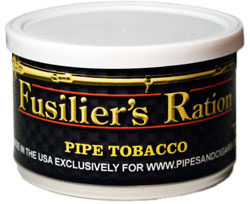 Since returning to PipesandCigars.com from my illness, I’ve spent a good amount of time preparing for the release of my newest entry to the Hearth & Home Marquee Series- Fusilier’s Ration. I’m really excited about this one as it’s the culmination of three years worth of trial and error, but I feel that it is one of the best things that I have done in the last seven years. So I thought that I would recount the process regarding this new pressed Latakia-based cake.

I’m haunted by memories. That’s been the impetus behind the creation of BlackHouse and some of the other tobaccos in our lineup. The one that has really stuck in my mind was my recollection of the Celebrated Bengal Slices. There was something almost magical about the bright, rich flavor and incense-like aroma of those slices in the black, red and yellow tin. I keep thinking back to those wonderful hours spent enjoying that blend. 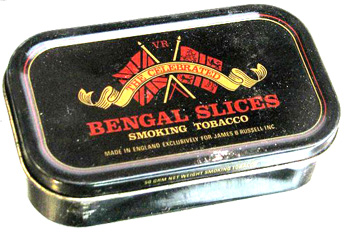 I made a couple of early attempts, but was terribly disappointed with the results. The Orientals that I had to work with just didn’t have the punch I wanted. After those trials, I shelved the project for quite some time. Just when it seemed that I would never find the right tobaccos to capture the essence of my old favorite, a quantity of great leaf became available. So, as Sherlock Holmes would say, the game was afoot.

We had so many projects in the hopper that pursuing this project had to be put on the back burner. When I finally had some time, I began to play around with it again, but again, the trials fell a bit short. I felt that the problem was with the Virginias. From time to time, I would go “in search of”, but never found what I was looking for. Finally, I came across some Brightleaf that I thought promising.

I put together some test batches using Latakia, those terrific Orientals, the superb new Virginias and some unflavored black Cavendish. One brick was particularly promising, but there was something still missing, and that was the unique topping that was used in the venerable cake.

Now, I know that some people will pooh-pooh an effort like this, as I agree with others, including Greg Pease, that it’s impossible to duplicate someone else’s work. That was never my intention; I just wanted to capture some of the essence of the memories that I had. The way I look at it is this: I’ve gone to a restaurant and had a terrific meal and then spent time at home trying to recreate it. Why is this any different? So, even though I knew that I couldn’t make an exact clone of my old favorite, just as I could never exactly mimic that meal, I wanted to see if I could get close enough to trigger some long past emotions.

As to the top dressing(s), I gave it some thought regarding the type of flavorings that would have been used when Bengal Slices were created. This was actually a bit easier than I first thought as the choices were very limited as to what could be used. I narrowed it down to about five possibilities. I began by starting with the tobacco blend that I had settled on, and then tried each one individually. Two, in particular, had a familiarity, but neither one clicked, so logic dictated that it must be a combination of them. After a few tweaks, I tried my new blend and was thrilled with the result; my long quest was finally over, I thought … but I was wrong.

MORE READING  Lighting Up Your Pipe

In mid April, I became ill with what appeared to be the flu. I pounded fluids and took ibuprofen, but after ten days I didn’t improve. I was cajoled by my daughters to see a doctor, which is something I hadn’t done in a long time. To make an already too long story short, I was diagnosed with a severe infection in my left foot which was exacerbated by undiagnosed diabetes. I hadn’t taken good care of myself, but I wasn’t prepared for this. The doctors took an aggressive approach, and I wound up having my left leg amputated below the knee. I realized that I had to take control of my life and became very serious about eating well and getting healthy. In the interim, I’ve lost 45 pounds, lowered my blood pressure and cholesterol and have gotten my diabetes under such good containment that I’m taking minimal medication. I’ve been fitted with an incredible prosthesis and am walking better than I have in the last ten years. I’m back up to full strength and am hitting the gym every other day. Because of all this, I came back to work energized and raring to go. So it made sense to me that it was time to roll out my new blend, Fusilier’s Ration.

Since I returned to the show circuit for the CORPS show in Richmond last weekend, it seemed like the perfect time to bring this to market. Our crack graphic artist here at PipesandCigars.com, Josh Crystal, did an amazing job on the label art, and we’re ready to go. I handed out a lot of samples at the show, and am eager for feedback.

Since I feel reborn, the introduction of what I feel is one of my best pieces of work as my “comeback” feels very appropriate. I had enough time to plan for upcoming projects that I am excited about this next phase of my career, and I hope to be looking at the maturation of my work. With my upcoming blend for the West Coast Pipe Show in Las Vegas in November, this will be a very busy time for me, and I can’t wait. I hope that many of you will give these new tobaccos a try and let me know what you think. It’s the enjoyment of our customers that drives me, and I hope to bring more to the plate to please pipe smokers and, oh yeah, you can read about them and get them here.