Thinking Outside the Tin: Tobacco Tasting and Blending

Tad Gage and Fred Hanna gave a 1-hour presentation and seminar at The 2009 Chicagoland Int’l Pipe & Tobacciana Show on Saturday May 2, 2009.

For your viewing convenience, we have split the presentation into 13 clips of 5 minutes each.

The lighting is a little dark at the beginning of the first clip, but give it a minute and it is corrected.

Tad Gage authored the book, "Complete Idiots Guide To Cigars" and writes for Pipes & Tobaccos Magazine amongst many other accolades. Fred Hanna has written numerous articles about pipes and pipe smoking published in many venues.

The syllabus for the seminar was:

Know what you like, like what you know: tasting and describing tobaccos
Fred’s tobacco analysis and rating sheet (Fred)
Identifying individual components (Tad and Fred)
Using your eyes
Picking apart the blend (visual and tasting raw leaf)
Analyzing the components

Effective tasting and analysis techniques (Fred)
You can’t make a bad blend good
The right pipe (draft, airhole, briar, minimal cake)
Prepping, slow smoking, analyzing as you go
Analyzing cellared vs. “new” tobacco blends
The Cat’s out of the bag (the Soderman conundrum): once you’ve rehydrated an old tin, you have to smoke it
Some tips on describing what you’re tasting (Tad)

Trying Your Hand At Blending
Creating your own unique blend is a time honored tradition (Tad)
Makers work hard to create blends, but they’re not sacred
Be a chef: add ingredients a little at a time
Using straight base/blending ingredients vs. mixing already created blends
Use your tasting guide as a roadmap to creating your own (Fred)
Personal blending tips (Tad)
Home stoving of tobaccos (Fred) 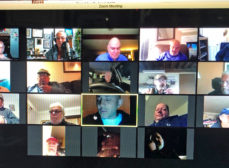