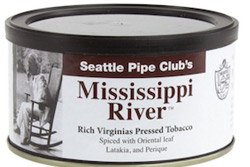 Is everyone enjoying their February and first steps into 2017? With the snowy weather keeping people indoors, or at least when they are outdoors dealing with snow, and the political climate, media pundits and internet trolls having a great time losing their minds, I’m avoiding it with much success. Snow or public insanity, this is part of why I smoke a pipe, go back to obsolete things like books with pages, and listen to weird music broadcasts on shortwave and medium-wave radio. Usually this is done late at night when the world is sleeping and preparing itself for another day of irrational activities, unproductive participation and self-righteousness.

A customer of mine at the shop brought in a tin of tobacco for me. Unceremoniously, he threw it my direction, both to test my catlike reflexes and to say, “Here, you want something to review? Try this.” In my cold little hands lay a tin of Seattle Pipe Club’s “Mississippi River.” I thanked him, and I remembered that at home, buried in my sad excuse for a cellar was a tin of the same stuff with a very different label. Going home and digging around, it was true: I had a tin from simpler times, dated 2008, that was also given to me a few years back. Now I had a dilemma: pop the vintage tin or smoke the stuff made last year? Regardless, spending time on the Mississippi would be a tropical vacation right about now.

Pushing a decade of sitting-time should be plenty for just about any tobacco out there, I reckoned, and with the headaches of living life in the future utopia-world of 2017, I could use a treat, and lo, the 2008 tin it was! I had been intrigued by this tobacco once upon a time, only to forget about it and wonder why I had hesitated. Many thoughts on this product from pedestrian to professional level seemed to be pretty impressed with it.

The original tin has a strange introduction on it:

“The way Joe tells it, it all came to him in a dream. Joe blended for 25 years before coming up with this, his first blend. Everything before was…unsmokable, says Joe. So one night, Joe wakes up from a sound sleep, grabs a pencil by the bedside and scribbles a recipe from his dream. He even dreams tobacco! Morning comes and he uses the notes to create a Virginia blend like no other. Mississippi River is born. The rest is history in a tin. Ask Joe if you don’t believe me. Members beg for this blend. It’s a little embarrassing. Hope you enjoy it as much as we do.” 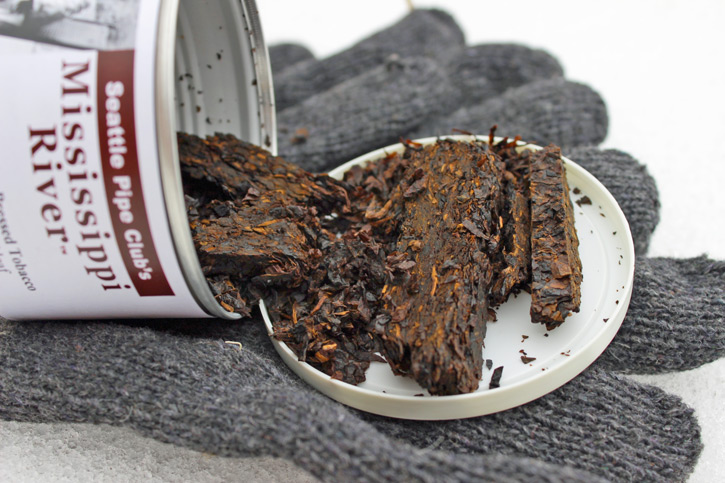 This 2008 tin of Mississippi River hissed-open something fierce as I pulled the ring, with the pressure of patient years behind it. Some of the crumble cake had broken away and fallen apart a little, either on its own or because it had been kicked around my collection for a while. The smell is on the sweet side, more like a fresh fruit salad than sugary topping, along with molasses much like that funky brown bread that comes in a can. I was actually pleased the tobacco was as moist as it was, too, because this is a good thing for aging. This tobacco is almost a little greasy in feel and texture, and I did let it dry out and “breathe” for a little while before initially smoking it. Packing the chunky crumble cake once it is broken apart is pretty straightforward. You fill, tap, pack and repeat until you have enough to smoke. I do have to say in choosing pipes ones with a particularly large draft airway will attract blockage pieces more often than not, but it wasn’t an overall issue. Lighting was a little bit of a challenge using petrol lighters, of which I know some are not fans, but lighting in windy conditions merits these devices. I overcame this with Mississippi River, especially before it dried out, with matches, of all things, which because of the winds around Nevada I usually forego. The stable and even heat of the match worked really well, once I used about a dozen or so!

Mississippi River’s initial taste is interesting in that the flavor is much like the smell: a somewhat molasses, fruit-like without being bright or acidic, with a little bit of spice on the front and sides of the tongue from the touch Perique. The Latakia is barely a squeak in the background, lending a more toasty note than a smoky or fiery one. Most tobaccos don’t usually smell so similar to how they taste, and for that, I give credit to this blend. I cannot tell you how many times I have sold tobacco, aromatic or non-aromatic, to people who expected the flavor on the nose to replicate to the tongue–only to be somewhat disappointed. Granted this might be a matter of personal senses, but even so, a tobacco that can represent itself to someone unfamiliar with it is a good thing.

Mississippi River’s flavor flows leisurely from the initial sweetness to more savory and woody tastes about mid-bowl. While this isn’t a particularly meaty tobacco, it has a good volume of smoke at this point, and the Perique starts to turn up a notch. There’s some plum essence to it all here, along with even a port wine kind of sweetness. Toward the end of the bowl, I experienced something of a disappointment in getting to know this tobacco–it fizzles out. I am one of those guys that enjoys smoking the thick dregs at the end of the bowl. I look forward to those intensified flavors as they crescendo into the finale. Denied my prize, there isn’t much there for me once I cross the finish line. As for chemical satisfaction, nicotine overall is pushing slightly out of the mild into the moderate category, which may be a positive to some folks. It’s there, but not overwhelming. I do have to say the smell this stuff produces while smoking is intriguing and intoxicating to those who are around it. I couldn’t find one person who objected to it when I subjected random folks in the vicinity to casual inquiry. 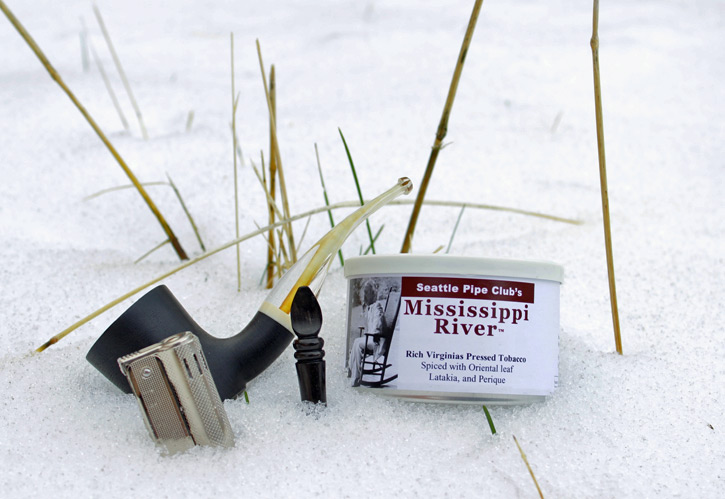 My final thoughts? For all the love and celebration this tobacco has behind it, I can certainly see the appeal. Granted, this is a tin with some serious age on it, and your mileage or years may vary considerably. I determined somewhat early on that it smokes a bit sweet and too mild for my personal tastes, but it isn’t a cloying or unnatural sweetness, nor is it boring. I am a fan of crumble cakes, but this one can be a tough to get lit. I enjoyed the mellow-but-present nature quite a bit, but sometimes it was a bit too mellow. The flavors are pretty unique in combination; I don’t think there’s too much out there like it that I’ve tried. The array of compatible pipes it worked in was vast, and the public seemed to love the aroma. The fact it did age so well means that it is a good choice for just about anyone stepping up to see what a good “serious” tobacco is like, or an acceptable, easygoing switch-up to a veteran’s normal routine. It might not be my new favorite, but I see what the dream-inspired intent was, and thumbs-up for that. Oh, and as a side-note, try light, sweet drinks along side this tobacco; simple hot toddies and tea for this time of year being a plus.

To finish with a side-review, I wanted to focus primarily on the aged tin I opened, but it wouldn’t be fair to write a review on an aged tobacco without making mention to the tin of fresh stuff that I also received–my opinion? If you get this stuff, do let it age. The newer stuff isn’t as nicely stitched together and has a more cacao-coffee thing going on. The Perique is a bit more pronounced and the Latakia a little sharper. It’s a little pine-like and briny. Not in a bad way, but certainly different. My advice? You can rush right in and smoke this stuff fresh out of the tin and be pleased. For those that are able and willing, much like the political tumult and snow that now surrounds all of us, throw it someplace dark and out of the way, forget about it for a year or more. You just might be rewarded for your patience, after some careful planning and consideration!