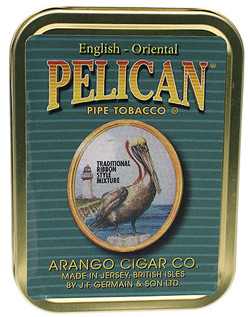 The American White Pelican is a native migratory bird that courses its way through Northern Nevada in early summer. Like most living things, they’re not exactly suited to life here, and like all wayward travelers they use the scant resources and move on soon after. This is important, because as I write this review, a noisy flock of these misunderstood birds are cruising at about 13,000′ above me, and I am smoking the last of a tin of “Pelican” by Arango Cigar Company. Coincidence aside, I’m not a great writer, but I know this: when things lean toward the absurd go with it.

Arango’s Pelican touts itself an “English-Oriental” put together by J.F. Germain & Son. So it’s more an Occidental-Oriental, semantics aside. I chose to do this review only for the tin art, I’ll be honest. Butera had great images on a lot of their tobacco tins, and I’m glad Arango keeps to using them. Ever since I saw a video of a pelican swallowing a live pigeon whole, I’ve a new respect for an already strange bird. Pelican, the tobacco, was originally released by Butera, then was blended by a bunch of others (McClelland, Stokkebye), and a decade ago the whole Butera name and product line of pipe tobaccos were snapped up by Arango Cigar. J.F. Germain once blended this mixture for Butera, and now blends the mixture for Arango.

Opening the tin gives the eager smoker a fantastic whiff of the most basic and underwhelming English blend imaginable. It doesn’t smell terrible, and for that I thank it, and while there’s a Latakia in there it’s more of a sweet, grassy scent with a light campfire smoke lingering around. The ribbon cut is in the delicate side, but it is easy to load and light. I’ll talk about moisture level later.

Your first few puffs do exactly what most English blends do: they let you know you have Latakia in the mix, and it tends to be less strong as the bowl is smoked. Pelican doesn’t disappoint here either, as it tastes like the most basic and straightforward English blend you could ask for. There’s just enough Latakia, and what I’m guessing are the Turkish and Virginia tobaccos rounding out the mix. The grassy notes I mentioned smelling in the tin mix in an odd way while smoking, and I never could get the hang of what the blender was going for using such fresh leaf. Maybe this is a change since Butera (or anyone else) originally held the product? By the time you get just past the first quarter of the bowl, there’s a tart and astringent attitude that is fairly pleasant. 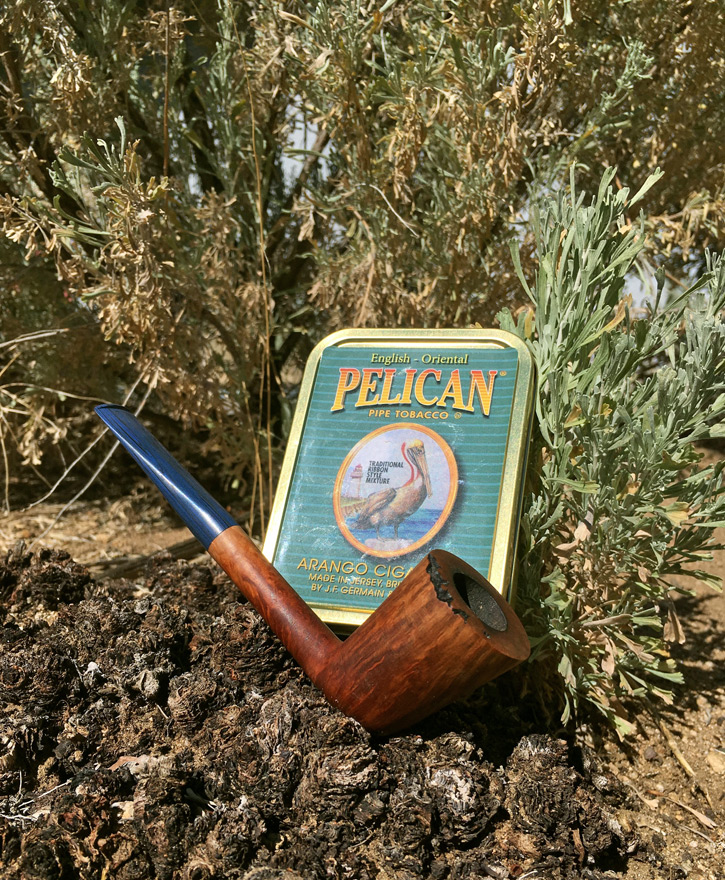 The halfway mark is where a few things improve while other questionable oddities pop up. The great thing is the forgiveness: the smoke is cool and regulated in just about any pipe and using any packing method. The not-so-great-thing is what might lurk below. It’s pretty tough for me to get proper bite from a tobacco, and this one gave me a few nibbles in a particular way. For me, this type of bite usually indicates an infamous culprit that I have yet to find a solution except to avoid it: propylene glycol. Pelicans, the migratory bird that is, normally doesn’t stick around my neck of the sagebrush too long. They’re water birds. They need moisture. Pelican the Arango offering apparently also needed moisture, and I did a small experiment to see if “PG” was possibly in there. Unlike a real pelican, Arango Pelican doesn’t dry out. I left the lid off overnight, which would make breakfast cereal crunch to most of my pipe tobacco. Nevada winds and single-digit relative humidity didn’t faze it. I found this to be odd since it’s uncommon to have an English or non-aromatic to have PG as a part of its makeup–not one that I know or enjoy, anyway, and I could be 100% mistaken. Either way, why the tobacco stayed suspiciously and perfectly moist for me or why I was getting a kind of bite from a tobacco remained a mystery. I hadn’t experienced “PG-tongue” in years since I gave up following common advice for newbies, being told to start smoking aromatics.

Three quarters to the end of any given bowl of Pelican was probably its best show: the tobaccos meld a bit more carefully, the grassy-newness subsides while the Latakia becomes a nasal whiff rather than a tongue-coating interruption. This same tart and astringent character is where I found a little redemption in a tobacco struggling to win me over. The sad part were the finales. All were a tad ashy in flavor, no matter what I smoked and which pipe I chose. 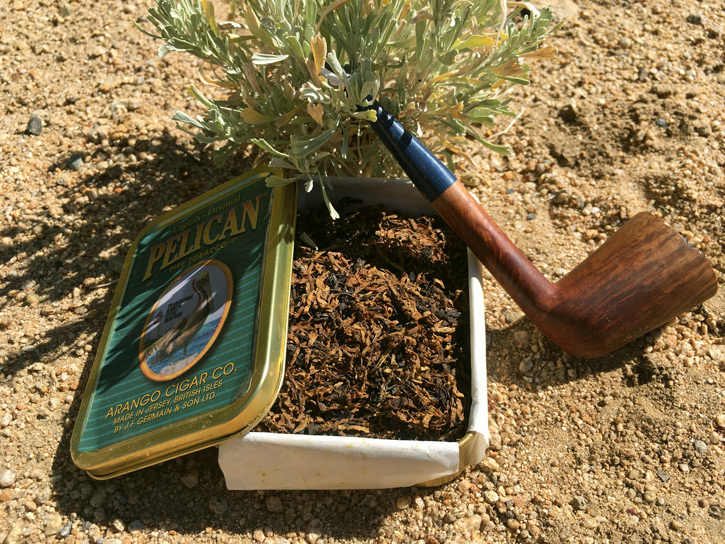 Odd duck, and the bizarre Pelican. Overall the tobacco is weirdly not bad. It’s by far not the worst thing I’ve stuffed into my pipes, it’s simply not very exciting either. The qualities that make it appealing, like having a cut that performs, and a gentle, interesting flavor get pushed aside by the fact there’s better, gentler and suspiciously more quality tobacco out there. The two ounce tin can retail in brick-and-mortar shops for close to the $20 mark as well, so it’s tough to call Pelican a good value, either. The good news is if I haven’t at this point reported anything that dissuades you, this tobacco is mild on nicotine, smokes effortlessly and isn’t too strong, and it pairs up decently with morning, daytime and evening beverages. If having a non-aromatic tobacco that doesn’t dry out easily is a bonus, you’re in luck.

Pelican might not have been my newest nicotine nest-mate, but it was fun to get to try something you don’t see around every day. Like the migratory flocks which share its name, Pelican drifts off eastward to live somewhere and with someone more appropriate. I wish it (and the birds) safe travels.