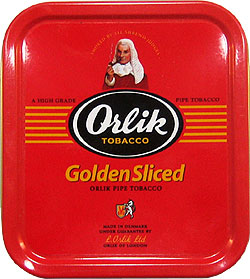 Last year when I spent 10-days traveling all over Denmark, I noticed that 90% of the pipe smokers I encountered were smoking Orlik Golden Sliced. It appears to be one of the most popular blends to smoke in Denmark in the Summer. Now that it’s hotter than heck here in Florida, it seems like the right time to pop open a fresh new tin. I had never tried Orlik Golden Sliced until I went to Denmark. I even got to see them making it in the factory. It is interesting seeing some of the cultural differences when you travel, and it is also interesting observing the marketing and packaging differences. Two of the largest, (and I mean HUGE), pipe tobacco processors in Denmark are Mac Baren and Orlik.

What’s interesting is that both of them market their blends domestically in pouches, but export to the U.S. in metal tins. I believe the simple reason for this is that in the U.S. many people perceive tobacco in pouches to be of lower quality than that of tobacco in tins. At least in Denmark and Russia, this is not the perception, as both Mac Baren and Orlik ship pouches to those countries. I don’t know which packaging is used in other countries, so if any of our international readers would like to post in the comments, that would be interesting.

Another note-worthy difference between Orlik Golden Sliced in pouches and tins is the big variation in the size of the flakes. In the pouch, there are two giant flakes that are 16-inches long, and then folded into thirds. Whereas the flakes in the tin are what us American guys are used to seeing, which measure just shy of 3-inches. (This is actually the first time I ever got out a measuring tape for doing a tobacco review.) 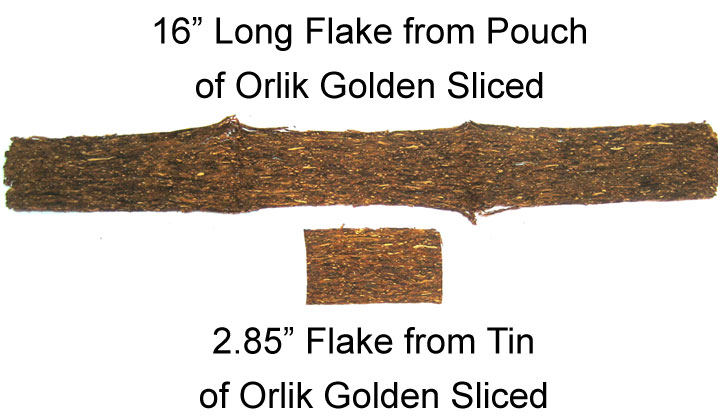 Orlik Golden Slices is described on the tin as a "… delightful blend of golden and full body Virginia tobaccos with a touch of Burley. A fine natural sweetness in taste and aroma characterizes Orlik Golden Sliced. The cut is the traditional Navy Cut Flake i.e. pressed tobacco and cut into slices. Rub the tobacco slices gently before filling your pipe." Not only do they tell you about the blend, but suggest a way to rub it out. I usually do prefer to fully rub out slices, which is what I did for this review. Another way to do it is the "Fold & Stuff" method, which cause the tobaccos to burn slower and cooler, but can also make for a more challenging smoke as to the draw. Some people prefer the fold & stuff method, especially for Virginia-heavy blends, which naturally smoke hotter because of the higher natural sugar component inherent in flue-cured tobaccos.

My tin is fairly new, having been purchased about 6 months ago, and just freshly opened. This is my first time smoking from a tin. I have been smoking from the pouches I brought back from Denmark. Upon opening the tin, you can hear the quick swish of air from the vacuum-seal being broken. They do a fine job of packaging the flakes exquisitely with a beautiful fine paper insert that is sealed with an Orlik sticker with the judge character on it. The sticker is reminiscent of an elegant cigar band. Many reviewers describe the tin aroma as "hay-like". It is somewhat hay-like, but to me, just slightly with some nice sweetness as well. If you look for it, you can pick up a faint aroma of citrus that is a cross between orange and lemon. The tin aroma is quite mild, sweet and conveys images of being outdoors in the countryside. It kind of smells like a farm, hence the hay aroma so often used to describe this blend.

The colors are a mixture of browns, light-browns with little bits of beige and butterscotch that all combine into making Orlik Golden Sliced dirty-blonde in color. To the touch, the moisture level feels perfect. I don’t detect any moisture at all, and it is not dried out as it is springy after being rubbed out. The feel of the tobacco is typical for Danish-style tobaccos. It is a little bit coarse, unlike American-style tobaccos which usually feel soft. The small size of the flakes is deceiving. I rubbed out two flakes and loaded up my new Comoy Tradition Canadian, and it seemed like I still had half the tobacco left over. Based on past experience with other flakes, I think you usually need about 1.5 flakes to load an average size bowl.

The rubbed-out tobacco still smells like the tin aroma, except a little bit stronger. I find it intriguing that the rubbed-out tobacco reminds me of the pack aroma of fine cigarettes. I mean that in a good way. Although I do not smoke or enjoy cigarettes, I do like the unlit pack aroma. It’s not really surprising since many cigarettes use a similar recipe of Virginia and Burley tobaccos. The pre-light draw is almost tasteless. I’m not picking up any flavor at all, so it’s time to finally light this baby up. The tobacco lights up quite well since I made sure to put the finest broken up particles on top.

Orlik Golden Sliced is extremely mild and slightly sweet. If the tin description didn’t say there was Burley in the blend I would have never known it. It tastes like a 100% Virginia blend as the Burley content is quite small. The Burley subtlety does it’s job of taming the Virginia tobaccos which can sometimes get a little hot.

If you either like or love Virginia tobacco blends and you haven’t tried Orlik Golden Slices, then you must. It’s a simple-tasting, mild blend that just tastes darn good. Even though the flavor is mild and the taste simple it is exceptionally enjoyable. Orlik Golden Slices is like the plain vanilla ice cream of the pipe tobacco world. It does get more flavorful as the bowl progresses and the citrus notes are much more obvious on the finish.

This is a tobacco that you can smoke all day, every day, at any time of day, and since it is not complex, it is also a good one to smoke when you are engaged in other activities. If you are a newbie, just remember to smoke it slow. I also recommend rubbing out the flakes so you have some bigger pieces of tobacco and some fine pieces. Put the bigger pieces on the bottom and the fine pieces on top, and don’t puff too hard.

Give us your review, or read others reviews – Orlik Golden Sliced Tobacco Reviews 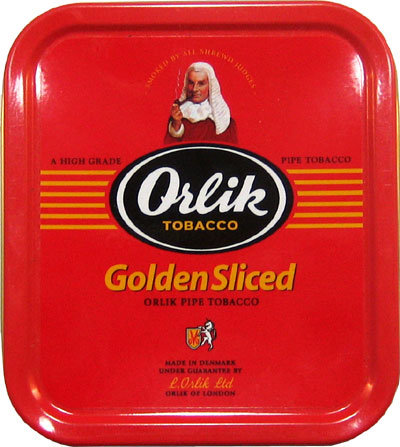