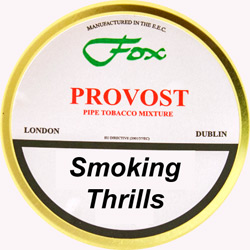 As changes start to happen every year about this time, a reversal of what usually happens around October–I start finding I want a little less Latakia and a little more Virginia. It’s true across much of the pipe world: all roads lead to Virginia…once they are cleared from snow, that is. I’ve spent some considerable time inside as the Wild West has been inundated with rain, and in my case, a lot of snow. I’m ready for some sunshine.

James Fox tobaccos aren’t as big a name in my neck of the woods as far as pipe tobacco, yet I do remember spending some time with the company’s products a while back. My predecessor Mr. E. Roberts tackled another James Fox product, Dorisco, which I also dove into in a more casual manner over on another forum. I remember having a good run-in with Campanile as well. As my tastes have been seasonally migrating, I shrugged and nodded as a random tin chose itself for me and fell out onto the floor as I rummaged through my cellar…

…this tin was James Fox’s “Provost Mixture,” as I noticed it came to a rolling stop on my cheap Pergo wood flooring. I don’t even recall when, where or how I originally acquired it. Picking it up and examining it, the packaging displays more E.U. visual propaganda and scare-tactics of the evils of smoking than anything. There isn’t any label art or a description anywhere; barely a logo–though a little research through their home page describes the tobacco as such:

“In this mixture, the sweet American Cavendish tobacco, which gives fullness and body, has been mellowed by the addition of choice bright Virginias to give a cool and satisfying blend.”

The tin upon opening reveals what I consider a “just-right cut” of calico tobacco ribbons inside, smelling gently of plums, raisins and figs. Granted, this is what I find to be the signature of a good Cavendish tobacco usage, not one that is amped up with sauce, smells and humectants. It’s uncommon for blenders and mixers in the pipe tobacco world to use quality or un-mucked-with Cavendish. I have recently, however, discovered that there are hidden gems and new treats that feature this traditional method of treating tobacco, and I have sheepishly enjoyed them. My hopes were I would enjoy Provost Mixture just the same. 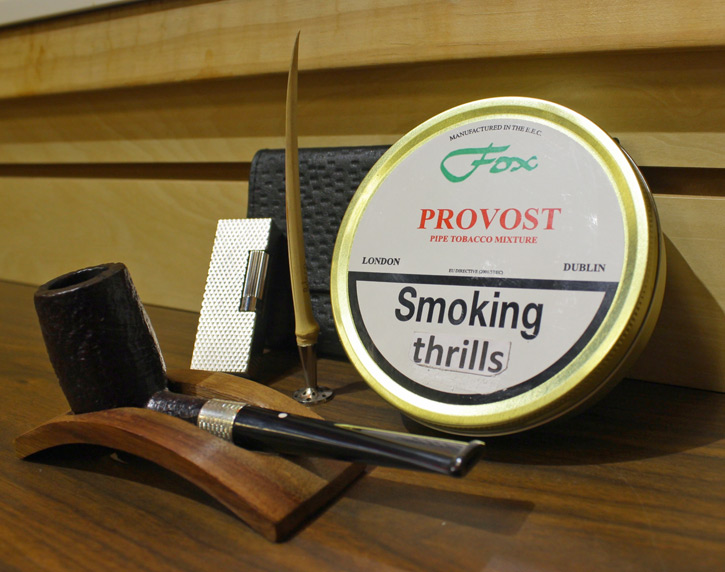 One quality I remember from James Fox products I have tried in the past is the damned stuff packs and lights well. It’s a small thing to be pleased by, but if I’m driving or simply looking forward to a book and a puff, this is a plus for me–not every day is a flake/plug/rope kind of day. Provost Mixture is no different in the James Fox lineup, which I consider user-friendly tobacco.

The initial flavors are indeed sweet, and thankfully, not cloying. It’s definitely that “good tobacco” kind of sweetness; think sugar cane and raisins. In the first quarter of bowls I smoked, Provost became a little bitey. However, this might have had more to do with my winter system chemistry trying to switch its flavor requests than a fault of the tobacco itself. As I kept smoking, this quickly disappeared and the tobacco opened up a little. If this happens to you, stick with it. This is what I’ve enjoyed about decent Cavendish. Rather than the sickeningly-sweet blacks and tooth-hurting maple of brown, pumped-up Cavs, they lend a soft, silkiness to the smoke. About halfway down the bowl, sweetness makes way to a much more industry-standard Virginia experience, which is exactly what I wanted: warm days, easy-going Virginias. This tobacco shines not only halfway through the bowl, but it takes a good half a tin to really dial in the tobacco’s liveliness. There’s a slight spicy edge that comes on and sticks around, one that I enjoy. The Virginia leaf lends a clean, almost tart cranberry upper-palate notes and…you’ll have to forgive this unusual flavor comparison: butter lettuce? Laugh if you will, and you should, but it has a garden-like freshness to it. This is not a complex tobacco, nor is it particularly subtle. The end of most bowls finished pleasantly, and at no time did it get tarry or swampy, but had a balsamic-like tone to it. Which is good, because butter lettuce and balsamic go really well together, and I’m chuckling to myself right now thinking about it being a “salad bowl.” Don’t mind me; it’s the cabin fever. I should get out more.

Normally I smoke stronger tobaccos, and I initially choose slightly smaller pipes (less than Group 3) when jumping into this tin of Provost Mixture. I found myself re-loading bowls because I wasn’t quite finished enjoying my puffing, and over time, I proffered a larger gauge and size of my pipes. Cobs were a fantastic choice, as were some larger Petersons and Comoys I had on hand. As an overall performer, this tobacco is quite tolerant. Slow and steady smoking seems to suit this tobacco best no matter where in the bowl you are. It doesn’t showcase any former tobacco flavors or ghosting from which a pipe may suffer, and the only warning I may have is for the fast-puffers out there. Nicotine in this stuff is a solid medium. If you want to get the spins, just smoke more. It smokes cool and pleasant enough that back-to-back bowl smoking was not a problem. It’s is a tobacco to take into public: at my shop, not one objection was made as to the room note. It’s not the kind of tobacco I’d suggest pairing with too many adult beverages simply due to its not being a very weighty smoke, but coffee was a smash-hit beverage with it in my book. In fact, this really is a great morning smoke and when I managed to enjoy it the most. I could see Provost Mixture really doing well with some age on it, so make some space in your own cellars for a few tins to sit a while. 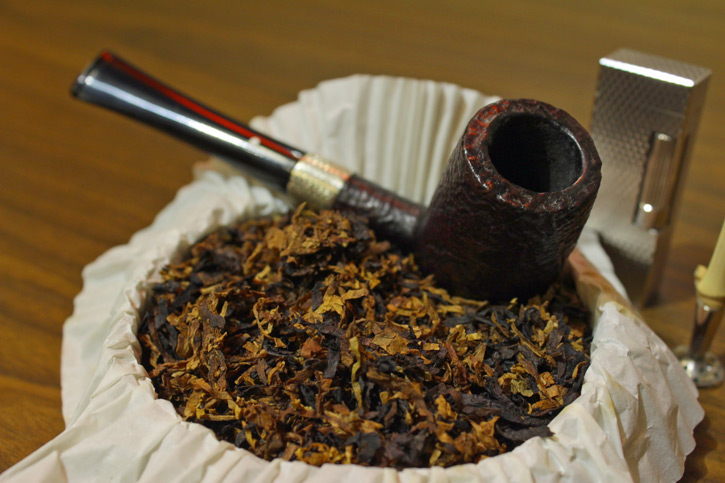 It doesn’t surprise me in the slightest that James Fox made good use of the misunderstood and unused tobacco known as “Cavendish.” Quickly dismissed by staunch non-aromatic smokers like myself (guilty!) there’s a world out there where it resides as a useful component. Provost Mixture is one I’d push aromatic-exclusive guys to give a shot, if anything, to push them to the “dark side” of non-aromatics. As the sun tries to warm up frozen stoops and icy porches, each day getting longer, I’m looking forward to getting back into my warm weather routine. This is the kind of smoke both worthy and unpretentious; it’s easy to not be sure about it, then suddenly finding it in high favor–it’s the change that is most welcome.

[Editor’s note: Cavendish is a process rather than a type of tobacco. It can be made with Burley or Virginia tobaccos, but the manufacturers usually don’t provide the information of which one they used. Read about Cavendish Tobacco here.]