I probably relate food to tobacco (and vice versa) more than most do.  It’s a disconnect for some people, but for me, I’m a hedonist for my own palate.  I learned cooking very young as a necessity and flavor has become an obsession ever since. Any time, any income level, or instance can be made better with just a little observation and knowledge.  A sense of adventure and a knack for learning certainly helps along the way.

Reviewing most things by GL Pease is an easy task for me.  He and I have similar appreciations for our senses, we simply passed through and arrived in some different (and for him, much more advanced) areas.  His approach to tobacco is that of myself for food.  It’s far more than pleasing the crowd, it’s about discovery and independence.  It’s not about doing it right, it’s about doing it with humility.  It’s about history, process and procedure.  It’s a balance between what was and what is.  It is a skill, and an art, tobacco and food. We often forget we’re the ones doing simply at this particular moment, yet people have been preparing and eating food, and smoking tobacco for much longer than what we see around us. Things change.  To ignore that or think us as automatically the cutting edge of innovation or procedure is not correct.  So when a new product from someone with any meaningful similarity arrives, my process is streamlined.

GL Pease held back nothing by the cheeky and simple naming of “Spark Plug.”  Yes, it has a British and automotive theme on the label.  When you open the tin however be prepared:  it’s a healthy (and quite photogenic) plug of tobacco. The leaves are impressive, nearly whole, and visually striking.  The color is a patchwork of contrast, layers and strata of Virginia, orientals and Cyprian Latakia compressed into a somewhat chaotic block. Aromas and smells that greet the nose are intoxicatingly English, both in the pedigree and style.  I don’t think I’ve yet opened a tin of domestic (or at least American-blended) tobacco that stood shoulder-to-shoulder with the UK products in scent alone, which is uniquely buttery, smokey and clean.

I haven’t had to contend with a plug of tobacco in a little while, and I had to dig for a favorite chef knife reserved for such a things.  It isn’t a fancy knife; a slightly pitted carbon steel blade that I rescued from a trash pile, but it cleaned up nicely and holds an edge.  The length is just perfect for rocking down the heel of the blade onto a plug of tobacco.  As I got to know this tobacco, I did what I normally do with plugs:  whatever I want.  Sometimes I cut, sometimes I break into it savagely, sometimes I peel off the layers.  It’s your tobacco, do with it as you see fit.  In fact, plug tobacco is my favorite presentation and preparation for the end user.  I believe a personal interaction with our pleasures is essential.  The more work there is removing the annoying things like stems and sticks, the more focused I am on the event about to happen.  I’m not here to teach anyone how to deal with their plug of tobacco, but I’m sure you’ll figure it out.  Here’s a hint:  there’s no wrong way to do it if you’re enjoying yourself.  Your only mistake would be not giving it a go.

Loading Spark Plug into a bowl is both a pain and a breeze.  Do you know whose fault that is?  Mine.  I had to learn again how to cut tobacco by hand.  I had to learn to slow down and rub out the flakes and slices just right.  I also loved every moment of it.  Once Spark Plug is lit, however (this, too, will vary in approach) the strikingly English nature of this tobacco comes to life.  I’m not saying this with praise and nonsense to kiss Greg’s ass, either.   If his product sucked, I’d tell him so—and he’d appreciate it.  This tobacco on the first puff gives that essential waxiness and gentle spice among the classic “campfire in the woods” attitude that so far only blenders in the UK have managed to try.  I’d say my favorite of these (and a good comparison) is Samuel Gawith, because “Squadron Leader” was my awakening into what a good, proper English bowl of tobacco is supposed to be.  Immediately all players are front and center:  Latakia politely pungent, Virginia demure and flirting with sweet, Oriental leaves (Izmir, maybe?) adding some tongue-tingling life to the flavors.

Mid-bowl takes a long time to get to.  This is a dense tobacco, and I’m thankful for it.  It smolders and sets its own pace.  The Virginia leaves go a little quiet at this stage and the oily, meatiness dials down too, but they are not gone.  It’s the middle of the show, after the opening act and no anticipation of the intermission.  This is the point I love getting naturally lost in my smoking.  In fact, sometimes too lost and I have to scramble to get my notes up to speed while I’m paying attention.  Relights, if they are needed, are a true joy.  Spark Plug has a dusted, baked quality, and with a warmth while smoking that is perfect for the mid-autumn chill that’s more common this time of year.  The nice thing about Spark Plug, and all plugs if I’m to be honest, is they change in flavor and attitude from bowl to bowl, and from pipe to pipe.  I used the same briar about four times in my rotations with this tobacco, and no other major variables changed—yet the smoke did. Plug tobacco is not as uniform and consistent as other tobaccos, because it is up to you to cut it, load it and pack it.  It also is not mixed really, it comes out of the box, gets portioned, and off it goes awaiting your enthusiasm and tamper.  Some bowls will get a little more Latakia.  Some will have a little less Virginia.  In the grand scheme of things, it won’t matter because the conversation is the same.  It would be pretty boring if every conversation started, maintained and concluded exactly the same.  There’s no risk and little reward.  This tobacco in that regard is an interesting conversation.  The same, yet still intriguing.

Spark Plug is perfectly consistent in one way:  the finish.  As the initial opening tin scent is akin to a proper UK-made English, these tobaccos tend to roll the credits in a very specific way.  My love for the saturated final puffs at the end of a smoke started with tobaccos like these.  Everything comes back for a final bow, sometimes the spotlight even focuses on a few of the main roles.  In this case, the Virginia and the Turkish/Oriental take center stage.  The Virginia gave up its sweet character early on, and has since become warm and experienced, almost calm.  There’s a sourdough quality that’s hard to miss.  The orientals also have released the sharper spices, and it’s the scent on the nose when exhaling that is most noticeable.  Imagine an herb garden on a warm, spring day.  There’s a flowering basil note, then a whiff of thyme.  Never once l did it become ashy, muddy or wooden in character.

I am happy Greg came out with Spark Plug.  I haven’t had a smoke like this in a long time, and I look forward to spending additional time with it.  The learning curve with a plug is self-evident, however in flavor I highly recommend anyone who has read along this far give this Yank’s version of a UK classic a try.  Nicotine is moderate, the flavor is variable and always delicious.  Whiskey paired incredibly well with Spark Plug.  Any whiskey.  Spicy rye to sweeter bourbon to scotch (although I would, as a rule, avoid peaty scotches as the smokiness from Latakia can meddle with the flavor).  Oh yes, and coffee.  Any coffee.  In fact, of my gins, teas and various other beverages I was hard pressed to find one that disagreed with Spark Plug.

It’s a fact of our spoiled, convenient life that there’s such a thing out there as “boneless chicken wings.”  They’re made with different meat, usually the drier and less flavorful breast meat, and perfectly machined and treated so they cook in nearly the same fashion.  They’re overpriced chicken nuggets shaped like wings.  Tobacco sometimes undergoes many of its own processing for whatever reason, but it’s much tougher to hide what tobacco is and what the intent is to be.  I like minimal processing.  I like things to be what they are.  The closer to the plant I am, the happier I am.  Spark Plug seems to do this in not only effective simplicity, but chooses to work with the tobacco and the process.

It’s not easy, as nothing worthwhile really ever is. 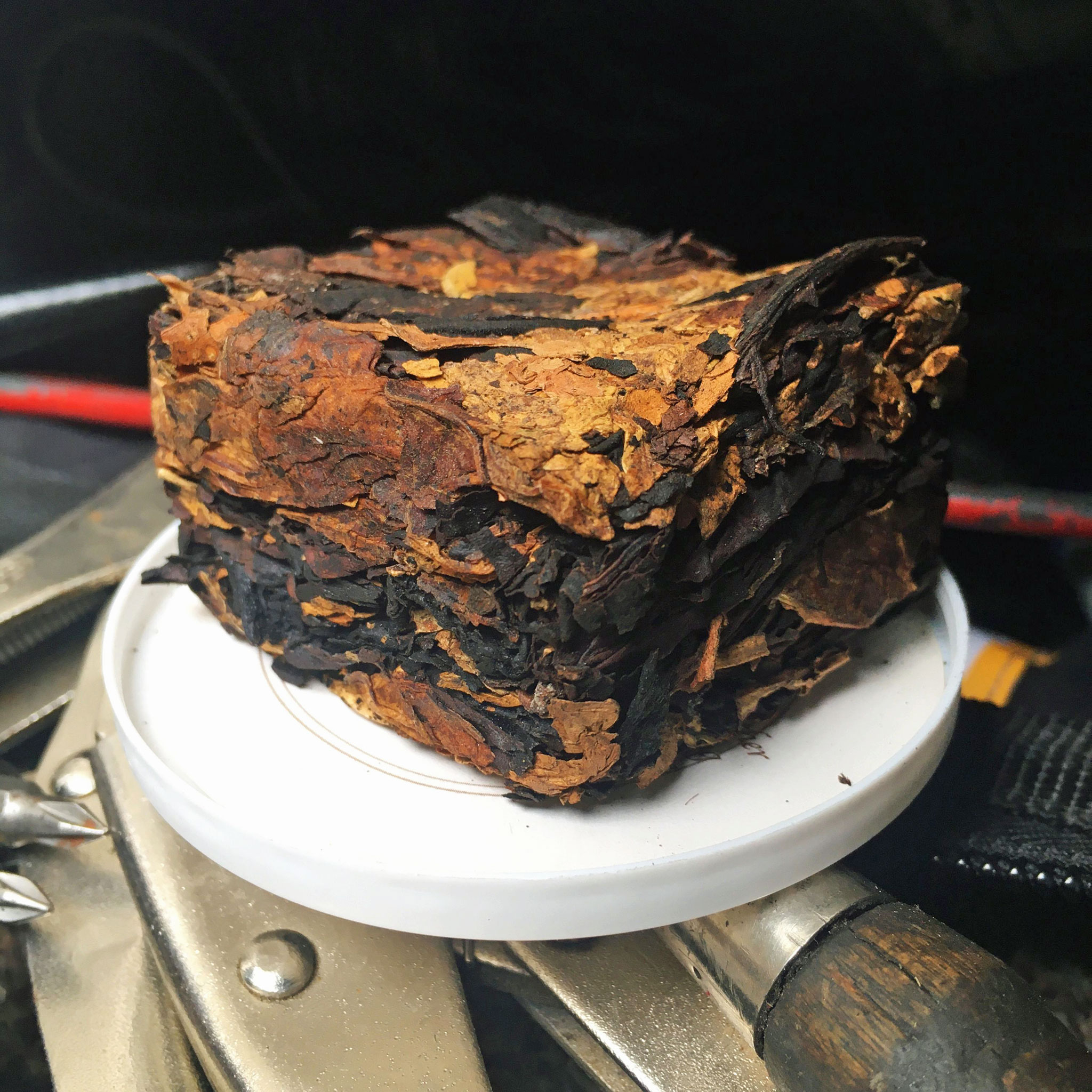 A classic English blend in an old fashioned plug form.