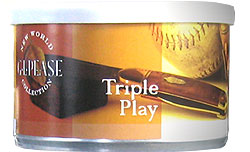 Part of the joy of pipe smoking at times can be the nostalgia it brings as an aged pastime that has spanned hundreds of years. The new G. L. Pease blend, Triple Play, has two nostalgic factors going for it. 1) It is in an old fashioned plug form, and 2) the name Triple Play along with it’s Springtime release connotes the all-American pastime of baseball which is also nostalgic, and brings back childhood, fun, Summertime memories, just like smoking a pipe does. Triple Play is also a double-entendre referring to the trio of tobaccos that work together to create this unique blend. This is a Virginia / Perique with just a touch of Dark Fired Kentucky. Pease tells PipesMagazine.com; "Triple Play has much less dark fired Kentucky than JackKnife Plug. I put just enough to add some dimension."

Upon popping the tin and taking a whiff, I am pleasantly greeted with the aroma of prunes, apricots and raisins. As far as appearance, even though this description has been somewhat overused in my reviews, it’s still the most fitting – it looks like a brownie. With the initial aroma and edible appearance, it is also reminding me a Lärabar energy fruit bar. It’s tempting to take a bite out of it. It smells and looks delicious. Color-wise, the hard chunk of pressed tobacco is mostly quite dark. There are just a few intermittent very light-brown or tan spots, but 99% of the tobaccos range from dark brown to very dark brown. There are some pieces that look nearly black, but on appearance alone, it is hard to find what I think the Perique should look like, since it is black. However, you don’t need a lot of Perique to affect a blend. It is referred to as a condiment tobacco after all.

The uncut plug feels just a tiny bit moist, which is natural for pressed tobacco. The extreme pressure creates a unique marrying of flavors. It also can release moisture and cause fermentation, which is what creates the special tastes, flavors and aromas of a pressed tobacco blend.

After cutting off a couple of slices you can see the layers of pressed tobaccos and I am once again tempted to take a bite out of it, but know that smoking Triple Play will offer a much better experience than eating it. I cut off two slices and rubbed them out. I only needed one and a half slices to fill my pipe, so I put the rest of the rubbed out tobacco back in the tin.

The tobacco is slightly moist. I busied myself with some other tasks for about two hours and came back to it. Now it feels just right for smoking. After rubbing out, the tobacco pieces remain a little bit chunky. Also, after the tobacco is sliced, rubbed out and given some drying time, the aroma changes. The Dark Fired Kentucky mostly dominates with a very light smoky aroma, which is completely different than a Latakia smokiness. The aroma also reminds me of being on a farm. I can smell the dirt, the hay in the barn, the horses. I am starting to wonder if this is going to be one of those great "Blends of Summer".

The pre-light draw is similar to the rubbed out aroma. It’s a beautiful Summer day and I am on the farm.

The initial light once again has the Dark Fired Kentucky greeting you with it’s outdoorsy, woody, smokiness, which is immediately followed by a nice light sweetness. I now have connotations of barbequed pork with a sweet BBQ sauce. I have to admit that I love Va/Per pipe tobacco blends. I don’t think I’ve ever met one I didn’t like. This one is certainly individualistic with the addition of the Dark Fired Kentucky though. There are some wonderful complexities going on in Triple Play. The two hour drying time has it burning perfectly and there are some superb tastes sensations happening here.

Did you ever listen to a great song where you could distinctly hear every instrument’s individual part on one level, and then on another level you could hear the overall song with all the separate pieces combining into one? This is what I am experiencing with Triple Play. I can separately taste the peppery Perique, the sweet Virginia, and the woody, smoky Dark Fired Kentucky in individual puffs like they are all taking turns in the spotlight. Then, when they all combine into a harmonious ensemble the flavor is quite robust.

Smoking in the middle of a beautiful sunny spring day here in Florida, along with the hearty flavors and aromas of Triple Play has transported me to a outdoor barbeque in the countryside with sun, green grass, and blue skies where there is a pig being slow-roasted on a spit. Triple Play once again reminds me of the flavor of a hearty piece of pork roasted over an open fire with just a slight smattering of sweet barbeque sauce. It is quite full-bodied. Many pipe smokers will enjoy this after any meal, but if it’s breakfast or lunch, a fuller meal would go better than a light one. After a hearty dinner Triple Play will be most enjoyable.

There is a nicotine hit here, but I am smoking very slow. I started to smoke a little bit faster and the nicotine kicked in a little more, so I slowed down again. Isn’t that what pipe smoking is about anyway? To slow down, relax and enjoy the wonderful flavors and aromas?

Ok, forgive me for ending like this, but I can’t resist saying that G. L. Pease hit it out of the park with this one. I highly recommend Triple Play.

Give us your review, or read others reviews – Triple Play Tobacco Reviews 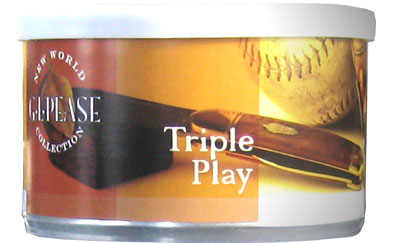