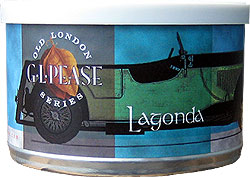 G. L. Pease Lagonda just shot to the top of my charts with a bullet! If you like Latakia blends or Oriental blends in any way, shape or form – I guarantee you will LOVE Lagonda. The flavor is full and complex, but in no way overbearing. I am experiencing my third bowl as I write this. I had my first bowl of Lagonda in my Ardor Giove Ninfea – 114 (YS), which is one of my favorite pipes. This was during the late afternoon, after having wine, cheese, pâté and crackers. My prior appetizers could definitely have an influence on my smoking experience, but that was the idea. I frequently enjoy those snacks just as I do my pipe and tobacco. (I don’t really think creating a "laboratory environment" is necessary for a professional tobacco review.)

I was so blown away by how amazing this new entry to the Old London Series tasted that I had to call Greg. This is my first tobacco review where my first bowl was being smoked while actually talking to the Master Chef himself on the phone. How cool is that? I told Greg that if Lagonda was a girl, I would marry her. He told me that eventually she would start complaining that we never do anything or go anywhere, and all I want to do is stick her in a pipe and smoke her. I then admitted that I frequently fall in love too fast … both with women and tobaccos … but in this case I think I’ve found a keeper! 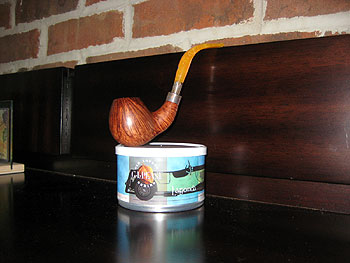 My second bowl of Lagonda was smoked later in the evening after a hearty dinner of Wild Salmon with Pearl Couscous, Slow-Roasted Tomatoes, and Lemon Oregano Oil. This time I smoked it in my Brebbia 925 First Sandblasted Calabash, and drink accompaniment of Neisson Rhum Agricole Réserve Spéciale. Once again I was so blown away that I had to call Bob Tate, or Associate Editor and tell him how great Lagonda tastes.

My third bowl of Lagonda is at 10:00 am after finishing breakfast of a triple latte, poached egg, and cinnamon-raisin toast. I brushed my teeth and drank a couple glasses of water to cleanse my palate for this third taste test.

When I first opened the tin of Lagonda, I was a little surprised. I was expecting it to be almost all black since it’s been described as "the heaviest of the Latakia blends so far in the Old London Series". Along with the obsidian pieces of leaf, there is an attractive mix of reddish-browns, brunette, and a sprinkling of blondes. The actual tobaccos in the blend are: Cyprian Latakia, Red Virginia, Izmir, and Bright Virginia. (My guess is the percentages are in that order based on look and taste, but this is just my personal speculation.)

I asked Greg if he could divulge the percentages and tell me which Oriental tobacco is used, as the tin just reads, "oriental leaf". He said; "I don’t really want to divulge percentages, other than relatively. Westminster and Lagonda both have over 50% Latakia. Lagonda actually has a little more than Westminster, but the balance of the other tobaccos makes more difference than the Latakia percentage. Maltese Falcon has quite a bit less Latakia, but also less oriental. I don’t discuss percentages, usually, because it’s really meaningless. If you smoke two different tobaccos, one with less latakia, but more oriental, the other with more latakia and less oriental, MOST people, if asked to rate them by latakia content, would get it wrong. The oriental in the blend is Izmir, but, again, I don’t publish that sort of thing often, since it’s not as important what the tobacco is as how it’s used. There are blends claiming to have Syrian in them, and they might, but it’s likely at a lower percentage than the vermouth in a very dry martini."

The cut is a unique old-style that Greg has brought back. He says; " … the leaf is layered, pressed and aged in cakes for several days in order for the flavours to integrate, and to sort of ‘jump start’ the aging and fermentation process. The cakes are then sliced and tumbled. Some people have referred to this cutting style (also used for Chelsea Morning and Meridian) as a ‘broken flake,’ but it’s really not that. It’s much more closely related to standard ribbon cutting, but since some of the tobacco strands continue to bind together, the result is somewhat denser than conventional ribbon-cut. It’s the way a lot of the old English tobaccos were produced. I revived the method, thinking that it would offer something interesting …"

There are definitely some chunkier stuck-together pieces and some more ribbon like pieces. I decided to rub it out a little. The tobaccos feel clean with a miniscule hint of moisture, and somewhere in between hard and soft.

The tin aroma when the new tin is first opened is dominated by the smoky Latakia. I could even smell it when my nose was three feet away from the tin during photography. A half a day later, the smokiness is still strongly present, but some of the other aromas are now being allowed to voice their opinions. There is some immensely enjoyable tanginess and maybe just a background hint of tartness. Damn this stuff is good. My tobacco purchasing habits are usually rather subdued. I have never bought more than three tins of a single blend at a time. I think I just found my first exception. I’ll easily grab 10 of these. This first tin is going to be gone in another day or two.

Lagonda is round, bold, robust and full. It is slightly smoky, quite tangy with a little tartness in the beginning. On my first smoke I detected sweetness, but Greg says it is not sweet, and thought it odd that I would say so. Now I think what I detected as sweetness is the combination of tanginess and tartness. The tart flavor becomes more pronounced as the bowl progresses. Last night I accompanied this with rum. Now I am thinking it would go well with port or a cabernet sauvignon. They are both different flavor profiles, but Lagonda could work with either. It is bold enough to stand up to a cab or even a stout beer.

Tart apples and tart plums are being conjured up here. There is a tiny spiciness in the background, and oddly, not as much smokiness as I would have anticipated with the Latakia component being over 50%. I am even thinking of the tartness of a Jolly Rancher candy. Could you ever just stop at one of those? The flavor is so good that you have to keep eating them until you’ve had ten. Lagonda is the same way. I want to smoke this all day. This is like an old-fashioned aromatic. A long time ago, aromatics were completely different than what we call an aromatic today. Present day aromatic pipe tobaccos are usually heavily cased and topped with sweet syrupy stuff. In the old days, aromatics were created by using aromatic, oriental tobaccos. That’s what we have here.

At the half-way point, some more of the smokiness comes out, but it still doesn’t dominate. The finish is long and delicious. You get thick billows of smoke and the sidestream aroma is thick and rich. I caught a teeny-tiny, minute buzz, so there is a little nicotine delivery here. But if you’ve read any of my previous reviews, you might remember that I am a nicotine lightweight.

When this blend was first announced, some thought it odd that G. L. Pease would come out with a new Latakia blend in the summer. Many people say they prefer Latakia blends in the winter. I think this is psychological with the typical Latakia blend being reminiscent of a campfire or fireplace, like one might experience in the winter. Lagonda is a great summer blend and a blend you can smoke anytime of year. There’s enough smokiness there to satisfy the Latakia Lover, and the tart and tangy flavors are delightful. 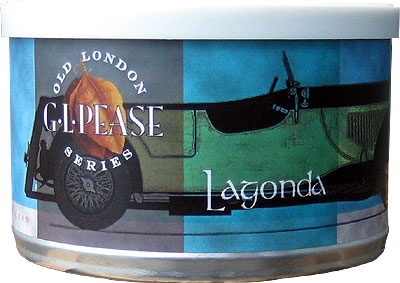