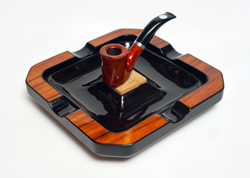 I’m in a hammock in a valley near the top of a mountain about 30 minutes from my home. I’m overlooking a particularly spacious piece of land filled with tall green grass and the background is dotted with pine trees and mountains. Apparently I was premature in assuming the weather had changed, for this is still September weather despite November being in full swing. I would complain something about global warming, but I think it may just be that we’re being rewarded.

My pipe is alight with a bowl of C&D Purple Cow. I ordered a tin of Kajun Kake and apparently whomever packed the box to be shipped was confused by the two similarly purple tins. Whatever happened, after a brief call, I did receive my Kajun Kake and walked away with Purple Cow as a bonus tobacco.

Little in life makes me as happy as hammocks, mountains, and bonus tobacco.

That said, my answers this month got a little long winded, so we should dive right in.

This morning I noticed a small hole in one of my favorite sweaters down near the waist line and I’m pretty sure it’s from an angry stray piece of pipe ash burning through the wool. At first I was just saddened, but that sadness turned to despair when, later in the morning, I noticed a similar hole in the right half of a pair of my wool socks.

I can waterproof my boots for the rain or the snow, but what am I to do to burn-proof my favorite clothes? Clearly I’m not going to stop smoking a pipe, or even tone it down a little.

First things first, how do you live in Albuquerque and own so many woolen things? Is this some sort of exceedingly thin marino or cashmere? I’m a bit at a loss here.

Now, as for your question. The only truly appropriate way for you to protect your things from ash is to purchase a wind cap and use it religiously. If you’re unfamiliar, a wind cap is a small (usually metal) device that attaches to the top of your bowl, and lets air in, but keeps ash from coming out. The beauty of smoking a bowl with a wind-cap is all the things people will assume about you when they see you.

It is, if I may say, a little like drinking beer from a stein with a hinged pewter lid. When you see someone drinking from a beer stein with a pewter lid, you assume they’re the type who would be comfortable wearing lederhosen in public. Even if the pewter lid was invented for something as mundane as keeping insects out of beer, you would never know that from the overwhelming awesomeness of those who use such lidded beer steins. Likewise, when you see someone smoking with a wind cap on their pipe, you assume something like, “Oh, that’s the type of person who fought in a World War (or three).” Then if you let your mind wander a bit you can come up with even more possibilities.

MORE READING  Ask Hank 14: The Perfect Smoke is Attainable with This One Weird Trick 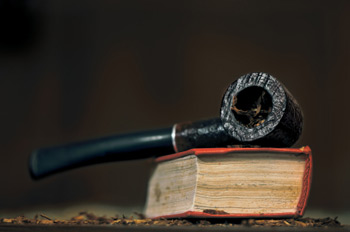 Probably they have climbed the highest mountain ranges in the world in defense of a good cause and used a wind cap to keep their pipe lit through countless blizzards forsaking family and friends to fight for the things they believed in.

That, or they became accustomed to a wind cap when walking next to a tank somewhere on a rainy morning after spending the previous evening in a fox hole desperately trying to stay warm.

Then, there is a good chance they traveled across Central and South America in the back of a freight truck (using the wind-cap to protect from the wind) as they hitchhiked to the most remote parts of rainforest and then searched out undiscovered beaches in search of a long-lost love.

Certainly this person wasn’t just trying to keep insects out of their pipe.

No, the wind-cap donning hero has been places most can only ever dream of going. They’ve seen things most hope to never have to see, but lived to tell of them in calm disaffected ways around family gatherings. They think back on the best years of their life with trembling, and severe windburn.

Or, at the very least least, that’s what people will think of you when you start using a wind cap and then somehow also manage to sleep at night knowing the wool you buy is a complete waste of money.

I live in a country that is hostile to pipes and everything else that is fun. Is it time for armed revolution?

And more importantly, if it is time for armed revolution, should I favor Latakia blends, or Virginias, in the hope they will improve my aim?

If the country you live in is hostile to pipes, first, pause and take heart–it’s highly probable your pipes will never know.

Most of my pipes (while caring and giving of themselves endlessly without ever asking for a single thing in return) are about as aware of their social surroundings as a rock. That is to say, they seem to be not in the least bit bothered by the fact that I prefer some of them over the others. My most expensive briars appear to not have even noticed that I much more often smoke my shortest, least expensive, and smallest cobs.

And there are a few whom I haven’t cleaned in far too long and they have yet to complain in the slightest, let alone unionize and go on strike.

All things considered, I would argue that armed battle is hardly necessary to defend the honor of our humble briar servants. I can, however, accept the possibility that I have somehow slowly collected a particularly dimwitted set of pipes, and perhaps yours are more offended than mine. If that’s the case, and you feel it is your duty to defend their honor with guns, who am I to stand in your way?

Oh, and the smokiness of Latakia is far more suited to battle (and aiming) than Virginias. But bring along some spare perique. You never know when you’ll need it.

Just talked it over with one of my pipes right now—yeah, he still has no idea I’m not allowed to take him to restaurants anymore,
Hank 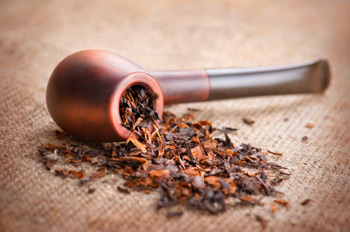 I’ve built a small shelf for my growing tobacco collection, and my pipe rack sits next to it. The problem is, when I pick a tobacco, I take it down off the shelf and it never makes it back. I also pick a pipe from the rack, then when I’m done I just set the pipe down wherever I happen to be around the house. If I happen to be close to the pipe rack I tend to set the pipe on the table right in front of it.

Is it against a code somewhere that I don’t keep my pipes nice and tidy? Can I be an obsessive pipe smoker and also a slob?

The short answer is no.

The longer answer? Pipe smoking was created as a hobby for the obsessive compulsive amongst us. Pipe smokers almost always have everything just so. That is to say, they wear near-perfect attire every day. They iron their clothes, even if they’re just wearing a white under-shirt. Most have hats for every single occasion (even if that’s a solitary yellow trucker hat). Almost every pipe smoker will tell you they manage their dating lifestyle, family lives, and their marriages with perfection. A pipe smoker seldom makes a mistake.

In our rankings have been presidents, scientific geniuses, writers, football players, millionaires, and …. probably other people. These folks rose to the positions of power they possessed through meticulous care in every detail of their lives.

So no, you cannot be a pipe smoker and accepted by the greater community when you are a also a slob.

Except… there is one catch.

The way to be welcomed back in to the community is to have a very strong opinion about something absurd and related to the hobby, and then you should regularly communicate that anyone who disagrees with your view on the matter is somehow “less of a pipe smoker”.

For example, insist that no pipe should ever be smoked three times in one day, but then (at the same time) also insist that a pipe always smokes it’s best when full of it’s second bowl of tobacco in a row. Two is the golden number, but three is downright sinful.

These are the kinds of opinions that drive conversations at pipe-smoking gatherings, and your ability to participate in shaming others proves you belong amongst the ranks of the best of us.

Why do you think a tobacco should never be pinched but instead should only be scooped (or the other way around)? Or why do you think so many people insist on the Frank method for packing a pipe? Is it also true that you must separate your Latakia and aromatic pipes from the ones you use with your Virginias? Or were all of these opinions merely offered by other pipe slobs fearful you would find them out?

By the way you’re doing it wrong,
Hank