Who Be Ye Smokers? (Pipes, Sanity, and Moby Dick) 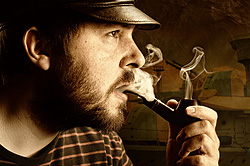 Many of us may recall the somewhat arduous task of having to read Herman Melville’s Moby Dick in school, wading through chapter after chapter of detailed accounts of whales and whaling in the nineteenth century as we impatiently awaited the final showdown between Captain Ahab and his nemesis, the terrifying and menacing white whale. Perhaps afterwards we were inclined to agree with the English critic who called the novel "an ill-compounded mixture of romance and matter-of-fact," one that is "disfigured by mad (rather than bad) English." But let us leave behind for a moment the bitter memories of homework and coerced appreciation of literature and view the novel with fresh eyes. For in addition to being the greatest fishing tale in world literature, Moby Dick offers a compelling reason for us all to enjoy a good pipe.


The Practicality of Pipes

Pipes make a fascinating appearance in Melville’s grand epic about man, nature, and the "ungraspable phantom of life." Pipes are the only, with one exception, form of tobacco-use mentioned in the over seven hundred pages of the novel, and their inclusion is far from ornamental. Ishmael, the narrator of the story, tells us that pipes sometimes serve a very practical purpose in the hard and dirty work of de-blubbering a whale, one of the steps necessary in extracting its oil. In one scene, a whaling crew must deal with a particularly malodorous carcass, and so they vigorously smoke their pipes as a way of neutralizing the stench. Some of them even break off the stems of their pipes almost at the bowl in order to shorten the distance between the smoke and their noses. 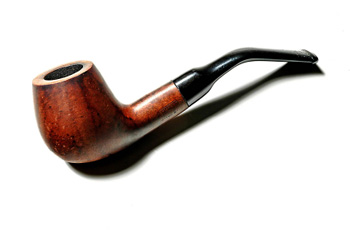 But pipes also have a much deeper role to play in Moby Dick. Our first encounter with a pipe smoker is when we are introduced to the harpooner Queequeg, the noble savage who is described as "George Washington cannibalistically developed." One of Queequeg’s most cherished possessions is his tomahawk pipe, which Ishmael says has two functions: to brain foes and to soothe the soul. The soothing part, at least, is apparent throughout the story. Once, after saving a ship from mayhem and a man from drowning while the rest of the passengers and crew look on helplessly, Queequeg celebrates by lighting his pipe and mildly eyeing those around him, as if to say compassionately, "We cannibals must help these Christians." Later on, Queequeg and Ishmael share the tomahawk pipe as they wait for a man below deck to wake up. By the time he does, the air of his cabin is thick from their blue smoke. The bewildered man, who opens his eyes to the sight of a sailor and a cannibal with pointed, filed teeth, can only stammer out, "Who be ye smokers?"

The novel’s patron saint of pipe smoking, however, would have to be the ship’s second mate, Stubb. An incredibly unflappable man who had "converted the jaws of death into an easy chair,"

Stubb is an avid pipe smoker:
He kept a whole row of pipes there ready loaded, stuck in a rack, within easy reach of his hand; and, whenever he turned in, he smoked them all out in succession, lighting one from the other to the end of the chapter; then loading them again to be in readiness anew. For, when Stubb dressed, instead of first putting his legs into his trowsers, he put his pipe into his mouth.

In fact, Ishmael credits the pipe to Stubb’s good nature:
What…made Stubb such an easygoing, unfearing man, so cheerily trudging off with the burden of life in a world full of grave peddlers, all bowed to the ground with their packs; what helped to bring about that almost impious good-humor of his; that thing must have been his pipe. For, like his nose, his short, black little pipe was one of the regular features of his face. You would almost as soon have expected him to turn out of his bunk without his nose as without his pipe.
Ishmael even suspects that Stubb’s continual smoking operated as a sort of moral "disinfecting agent," protecting him from the bad air containing the "nameless miseries of the numberless mortals who have died exhaling it."

Ishmael appears to have less esteem for the power of cigars. The only time that mention is made of another usage of tobacco is when the notoriously thoughtless and unimaginative third mate Flask is looking at a doubloon in which everyone else sees great meaning. For Flask (nicknamed King-Post), the exotic coin is nothing but “a round thing made of gold” worth sixteen dollars or “nine hundred and sixty cigars.” The sole cigar-smoker in the novel, who proclaims that he “won’t smoke dirty pipes like Stubbs,” is the one character conspicuous for being “utterly lost… to all sense of reverence.” 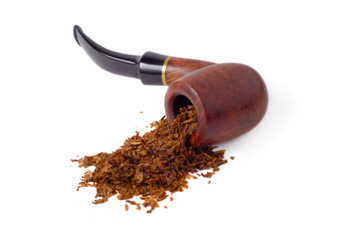 Pipes and Humanity
If Stubb is the pipe’s patron saint, mad Captain Ahab is its diabolical enemy. Not long after the ship’s fateful voyage begins, Ahab is seated on deck smoking his pipe. After a while, Ahab realizes that "this smoking no longer soothes." Saddened, he laments, "Oh, my pipe! hard must it go with me if thy charm be gone!" Knowing that a pipe is meant for "sereneness," Ahab acknowledges that his monomaniacal plan of revenge on Moby Dick, who had bitten off his leg, is incompatible with the pleasant activity of sending up "mild white vapors among mild white hairs." His reaction is drastic:

He tossed the still lighted pipe into the sea. The fire hissed in the waves; the same instant the ship shot by the bubble the sinking pipe made. With slouched hat, Ahab lurchingly paced the planks.

Not long after what becomes known as "the affair of the pipe," Ahab reveals his deranged scheme to the crew and successfully seduces them into pledging their aid. After a sinister celebration of their pact, Ahab says to himself, "I’m a demoniac, I am madness maddened!" The implication is clear: the pipe is not only a symbol of Ahab’s serenity but his sanity. When he irrevocably turns his back on his pipe by tossing it into the sea, he irrevocably turns his back on his mental soundness and his own humanity.

This link between pipes and our warm human nature is so great that when whales are not being demonized in Moby Dick, portrayed as terrifying "Leviathans" or creatures "possessed by all the angels that fell from heaven," they are being humanized with the endearing trait of, believe it or not, pipe-smoking. Ahab is the first to do so during the affair of the pipe when he compares his labored and nervous puffs windward to a dying whale, when its "final jets [are] the strongest and fullest of trouble." But the main description comes when pipe-smoking Stubb kills a gigantic Sperm Whale. Before sensing trouble, the whale is lazily undulating in the sea, "tranquilly spouting his vapory jet…like a portly burgher smoking his pipe on a warm afternoon." And with a note of sympathy, Ishmael adds, "But that pipe, poor whale, was thy last." When the hunt is over and the sea boiling in the blood of the slain giant, Stubb removes the wet pipe from his mouth, looks at the whale, and says, "Both pipes smoked out." He then scatters the ashes of his pipe over the water as if in a funeral rite.
Perhaps it is no coincidence that Ishmael also confesses his curious theory that "from the heads of all ponderous profound beings, such as Plato, Pyrrho, the Devil, Jupiter, Dante, and so on, there always goes up a certain semi-visible steam, while in the act of thinking deep thoughts." Could not this faint steam take the form of the thin wasps of smoke spiraling up from a deep thinker’s pipe? And when Ishmael raises the possibility of whales becoming extinct through overhunting (a concern even in the nineteenth century), he puts it in terms of pipes for both man and beast. "Another inquiry remains," he writes: "whether [the whale] must not at last be exterminated from the waters, and the last whale, like the last man, smoke his last pipe, and then himself evaporate in the final puff." 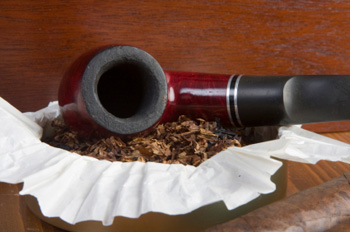 Pipes and Morality
Now all of this talk about pipes and the best of our humanity might seem a little random, but consider the claims made in The Fitz-Boodle Papers by William Thackeray, an English contemporary of Melville’s. In the essay, a Mr. George Fitz-Boodle boasts that he has remained loyal to his pipe ever since he was a young man, for it has kept him from vices and encouraged his virtues. A pipe, Fitz-Boodle quips, "begets only benevolent silence, and thoughtful good-humored observation." Looking back on his youth, Fitz-Boodle writes that he did not dabble in debauchery, for "the calm smoker has a sweet companion in his pipe." He did not drink immoderately, for "though a friend to trifling potations, to excessively strong drinks tobacco is abhorrent." And he did not gamble, "for the lover of the pipe has no need of such excitement."

Yet despite the moral benefits of his pipe smoking, Fitz-Boodle "was considered a monster of dissipation" by his family. This gives him something else in common with the central characters of Moby Dick. Both the whalers and the whales were held in low esteem by the rest of society at the time. Consequently, Melville, a one-time whaler himself, devotes a great deal of effort into changing public perception about both the hunters and their quarry. He argues, for instance, that whalers were no mere fishermen but among the bravest of seamen and that the sperm whale was no ordinary prey but a fearsome and lethal adversary, the largest toothed animal on the face of the planet. How interesting that pipe smokers today face many of the same prejudices as their nineteenth-century forebears.

Conclusion
At one point in the story, a dimwitted innkeeper, fearful that one of her tenants has killed himself, instructs her servant to commission a sign that reads: "No Suicides Permitted Here, and No Smoking in the Parlor." Little did the silly woman know that letting her guests smoke in the parlor might just give them another reason to live. Pipe smoking in Moby Dick is a cause of mental health, a sign of the nobility that is accessible to the common man (or whale!), and a mark of good-natured humanity. Although the age of whaling has thankfully passed, let us be grateful that the age of the sanity-succoring pipe has not.