In an email received today – This is great news!!! After a full week of being lost, I had given up hope that this pipe would ever be found. I have tried unsuccessfully to find this message on the link below. Do any of you have contact info for Bruce, such as his last name, email address or phone number? Thanks — my faith in the camaraderie and goodwill of pipe collectors has been restored, and I liked that pipe more than I was willing to admit.

Bruce was sitting on my right at the table, and he was very generous, offering samples of John Cotton’s No. 1 Mild and Cuban cigars. His pipe bag was giant-sized, so I am not surprised that he did not see my pipe until he unloaded each pipe one at a time.

I just received an email from Rick Newcombe, whom many of you know as a prominent collector, and author of the book, "In Search of Pipe Dreams" – that he had a pipe stolen at the Chicago Pipe Show.

It’s almost shocking as pipemen are usually of the highest caliber of character. I know of many people, including myself that will leave their pipe, or pipe bag on the table and roam around the smoking tent in Chicago, and it’s always there when you come back. I actually did leave my bag with 5 Dunhill pipes in it sitting at a table where I started, all the way on the other side of the room, while I roamed and chatted for hours, and when I returned it was still there.

There is so much camaraderie at pipe shows, and it seems like everybody knows everybody, so there is a lot of well-deserved trust.

Unfortunately, one person let their desire get the best of them and did the wrong thing.

Here is the only photo of the pipe that was stolen. Rick’s email with more details is below. 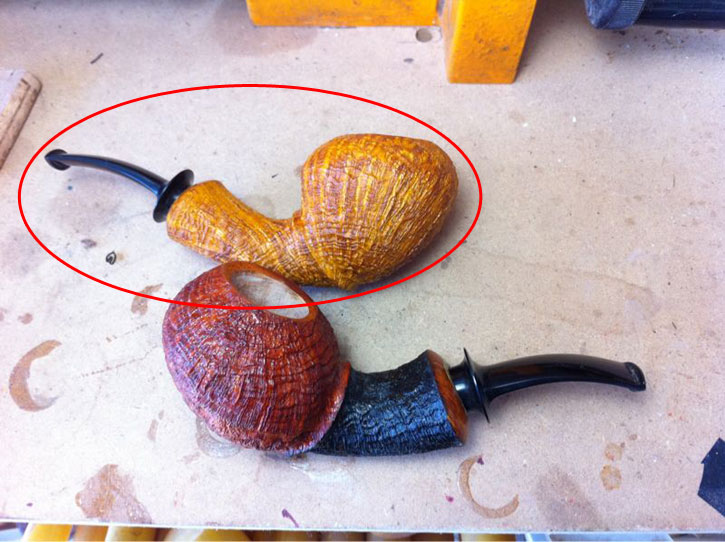 For this first time in my life, I had a pipe stolen at a show. It was the Jeff Gracik freehand shown above with a "butterscotch contrast" stain. I love the fact that it was stamped 540 11 in case the thief tries to stain the pipe black or a different color and then offer it for sale. I am sending this email to you because you are familiar with high grade pipes and are likely to spot this one in case someone is offering it.

I was smoking the pipe while seated at the judges’ table during the Balkan Sobranie Throwdown in the tent. Several people (I don’t remember who) commented on the pipe, saying they really liked it. After the banquet dinner, I was back in the tent seated with friends who I totally trust. I put the pipe on top of its leather sleeve on the table because a pipe maker (Dave Neeve) asked to see it. He is totally trustworthy. The pipe was passed around the table; I left to get a drink and ran into a thousand friends and did not discover it was missing until I was in my room shortly after midnight. I ran back to the tent, and the same group was still at the table. Everyone checked to see if they mistakenly put the pipe in their bag — no luck — and I got down on all fours and searched the ground, but no pipe. Both the sleeve and pipe were taken. Someone must have come over to the table for a brief moment and grabbed it. How? I have no idea, but I feel confident that at some point they will try to sell it.

Thanks in advance for any help you can give me.

If found, the pipe can be returned to: