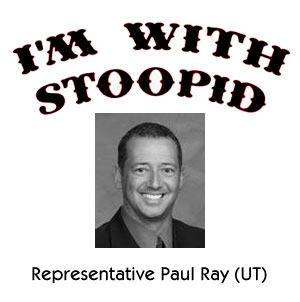 It’s Déjà vu all over again in the state of Utah.

He is using the same old worn out excuse that he wants to save the poor children from mistaking tobacco for candy. Hmmm … why doesn’t he ban candy then?

It seems Ray got his ego bruised when he was challenged in the past, so now he has expanded his efforts.

Now Ray is back with a broader ban: He’s added flavored tobacco products, including pipe tobacco, snuff and possibly even shisha used in hookah pipes. It would exempt electronic cigarettes and nicotine products used to help people stop smoking.

"I don’t like to play games. I don’t like to be threatened," Ray said Wednesday at a Health and Human Services interim committee hearing where he presented the proposed Flavored Tobacco and Nicotine Product Restriction Act.

The committee didn’t vote on the bill, which will be presented to the full Legislature during the session that starts in January.

The bill doesn’t address flavored cigarettes and cigars, which are already outlawed by the FDA.

No one from the tobacco lobby spoke at the hearing.

Before the hearing, Kenn Crandall, representing the cigar and pipe business Tinder Box in Murray, estimated the law would eliminate one-third of his products.

"This would be just one more strike at our business," he said, referring to the state adding $1 to the tobacco tax earlier this year, a move also pushed by Ray.

Of Ray’s latest attempt, "This is the first step to eliminate tobacco completely," said Kendrik Woolstenhulme, owner of Hungry Trout Cigars in Sandy.

Ray said his goal is to protect children, who could mistake some of the products for candy or be enticed to try smoking based on the flavored products. But the smoke shop representatives said the products already can’t be sold to minors.

Has anyone ever seen a kid with a tobacco pipe? Seriously!

Ray said legislative staff is still verifying that the law would forbid the sale of shisha, the mixture of tobacco and flavorings used in hookah water pipes. That would address the concerns of some local health departments, which have been trying to find a way to ban hookah smoking in public places.

Apparently, you don’t have to understand the law, or care about personal freedoms in order to be a lawmaker.