It is with deep regret that we report to you on this New Year’s Day of 2013, the passing of Bill Unger. Bill was the longtime Secretary/treasurer of the North American Society of Pipe Collectors. He died from complications of Leukemia. He was 70-years old. Even though Bill posted an open letter about his condition on November 30th, his passing was still somewhat of a surprise as his letter stated; "Barring a miracle (which of course I would never bar!), I have less than a year left." To the optimistic and hopeful mind, one would think that meant closer to a full year rather than just one month.

Bill was a regular attendee of most the pipe shows held around the USA, and he was one of the organizers of NASPC’s Pipe Show held every August in the Columbus Ohio area. One of Bill’s well-known quotes was; “If you have one pipe, you’re a pipe smoker. If you have two pipes, you’re a collector”. 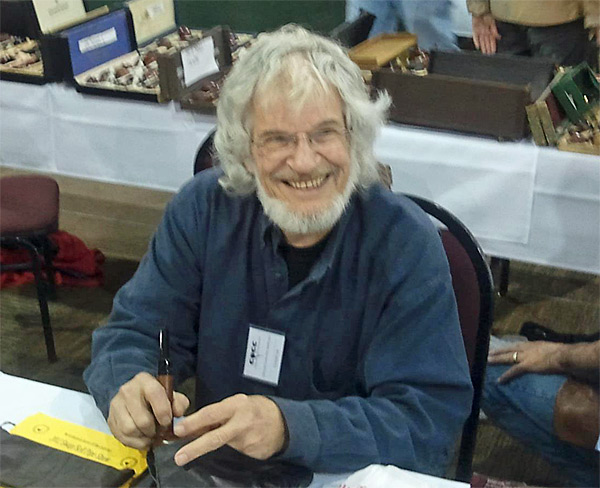 All PipesMagazine.com staff wishes to express their deepest condolences to Pam Unger and the rest of Bill’s family. May you rest in peace Bill. – Kevin Godbee

This isn’t easy, but, as the cliché goes, it is what it is. In late April, shortly after my 70th birthday, I was diagnosed with Myelodysplastic Syndrome/Refractory Anemia with Excess Blasts and began a course of regular blood transfusions for low hemoglobin and chemotherapy for the blood cancer. Unfortunately, the chemotherapy did not work, and, in late October, a bone marrow biopsy revealed that the blood disorder had progressed to acute leukemia.

After serious thought, I have opted not to undergo the aggressive chemotherapy that would entail a month of hospitalization and severe, potentially life-threatening side effects only to prolong my life by at most 6 months. My loving wife Pam and I will continue, as we have, to enjoy one day at a time, with supportive blood transfusions as needed. Barring a miracle (which of course I would never bar!), I have less than a year left. Pam and I will make the most of whatever time I have left. I know that I can count on the positive thoughts and prayers of the entire NASPC membership.

Now, what about the future of NASPC? John, our president, and Jeff and Eddie, our printers (and so much more!) are committed to the continuation of our show, especially after one of our most-successful events ever, and of the Pipe Collector. Immediately following the mailing of this issue, Jeff will replace me on the NASPC board and assume the duties of secretary/treasurer, while Eddie, with Jeff’s help, will assume the editorship of the Pipe Collector. I think that this transition can work very well and can prove that, although NASPC depended on me to a large extent, it can and will continue very well without me.
———————————

It is with great sorrow that the North American Society of Pipe Collectors announces the passing of its longtime Secretary/treasurer Bill Unger. Bill passed away quietly on January 1, 2013 from complications of Leukemia.

Many people remember Bill as the gray haired aging hippie manning the microphone through out a NASPC show calling out the names of Raffle winners. Others will remember him as the somewhat curmudgeonly guy at the NASPC table at other shows or in Pipe shops forever extolling the virtues of being a member of NASPC. But most of us will remember him as the friendly gracious pipe smoker who was always willing to chat about most any subject.

However, Bill was much, much more. Coming to Columbus from Illinois in 1960, Bill attended Ohio State on a football scholarship. Though sidelined by a knee injury early in his career, Bill retained his scholarship, and did see some action under the legendary Woody Hayes. He received his BA, and MA in English from Ohio State, and became a lecturer in English at Ohio State. He then returned to the Chicago area, where he worked for Encyclopaedia Brittanica and met his lovely future wife Pam. Bill and Pam then returned to Columbus to pursue their respective doctorates. Always the quintessential hippie, he loved his folk music, especially Bob Dylan, and got great joy in talking tunes to those who’d listen.

An accomplished author and editor, Bill operated the Acme Writing Company in Columbus for many years. He wrote the book As Individual as a Thumbprint: The Custom-Bilt Pipe Story. He is survived by his wife of 44 years, Pam, dog, Stanley, and more friends than can ever be imagined.