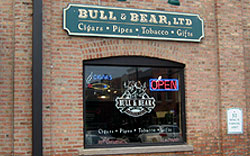 St. Charles, Illinois is a charming Midwestern town just one hour Southwest of Chicago. It has beautiful landscapes, canoes and kayaking, tempting boutiques, and restaurants in a quaint downtown. It is also the home of the Chicago Pipe Show at the exquisite Pheasant Run Resort. This is what brings us here. However, St. Charles is also the home of the Bull & Bear Tobacco Shop, and it is a shop that pipe smokers will enjoy. Their current inventory includes over 500 pipes from makers such as; Design Berlin, Moretto, Armellini, Charatan, Winslow, Ferndown, Servi Meerschaum, Savinelli, Parker, Butz-Choquin, Peterson, and several others.

Bull & Bear also has a wide array of pipe tobaccos to choose from including; Cornell & Diehl, Dunhill, Samuel Gawith, Mac Baren, Peterson, Esoterica, Dan Tobacco, Rattray’s, McClelland, Ashton and several more. As well, there is a large selection of bulk tobaccos to choose from. The 1,400 square foot store also includes a smoking lounge with the obligatory plush leather chairs and couches, a wide screen TV along with coffee and other beverages available on site. Store owner Zita "Z" Harmon tells us that she has a regular 3:30 crowd that comes in to watch Jeopardy while enjoying their smokes. She goes by "Z" since most people pronounce her name incorrectly. Her name is often mispronounced like "Rita", however the "I" is short, like in the word "sit".

For the last three years, Bull & Bear has realized a marked increase in sales of pipes and tobaccos, especially "starter pipes". Some of the increase is from new younger entrants to the pipe hobby, and some of it is cigarette and cigar smokers looking for a more affordable smoking alternative. Ironically, the poor economy is a positive factor in the growth of the pipe market. As one would imagine, the higher end pipes, those retailing for over $500 have slowed. The silver lining for the pipe business is that there are several new entrants that may stick with it, and when the economy improves they may start trading up to the higher end pipes. Most of Bull & Bear’s pipe sales fall into the retail price range of $100 – $500.

Zita has owned the shop for nearly five years, since October 2006, and it has been in business since December 1995. She is the third owner. The shop was originally started by a wealthy publisher that liked cigars, so he opened a cigar shop. There is also a Bull & Bear store in Naperville, IL, which is from the same origins, but now under separate ownership. When asked what gave her the idea to own a retail tobacconist, Z explains that she wanted to own a business and thought that this would be more fun than any other type of business. When we mentioned that most retail tobacconists are owned by men, Z asserts that she has always been in male-dominated industries, and she was always the first woman to be in certain positions, so it just seemed natural for her to be in the pipe and cigar business as well. She says; "It’s fun to do something that people don’t expect you to do." 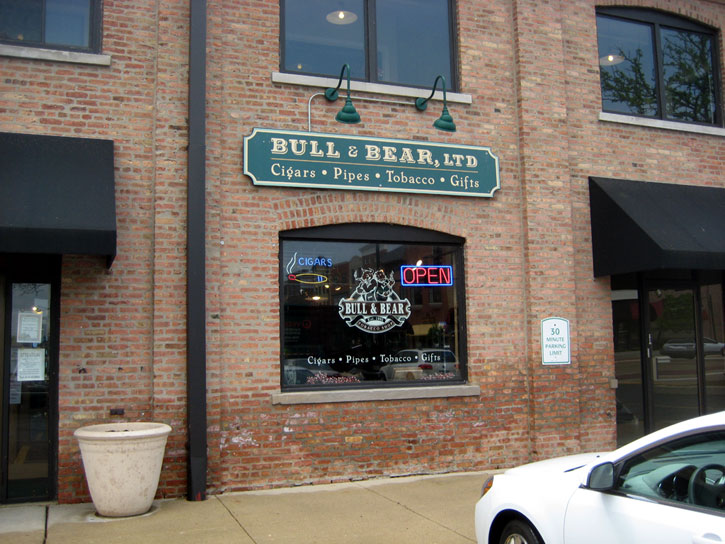